Getting Cold Camping? Night's Worth It! 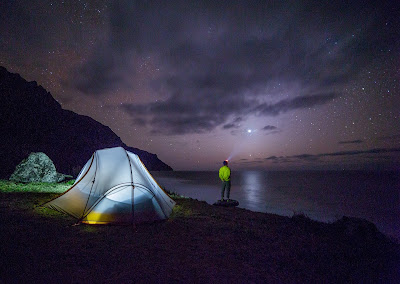 "Evasive?" I hear you splutter. "Comes around once a day! Or night..."
Evasive, yes. Also enigmatic and unfathomable.

Let me elucidate a little. Night and Man have existed together for thousands of years, but how well do we actually understand her? How do we perceive her? Gloomily - night is the deathlike shroud that casts a blackness over the living earth. Fearfully - night is the haunt of creatures and dangers unknown and unheralded. Thankfully - night is usher of sleep that knits the tattered threads of life and makes them new.

It had been raining. In a tent, rain makes itself known to a quite extraordinary - and sometimes misleading - extent. To the unaccustomed ear a shower of rain on fabric sounds rather as though the clouds above were unleashing the Victoria Falls - a notion that persists until you fearfully poke your hooded head out of the doorway and are presented with a downpour more in line with one of those ornamental solar fountains you might have in your garden than Earth's mightiest cataract. It's noisy, but it's unlikely that you'll need your inflatable mattress to double as a life raft.

Now, as I woke from my light slumbers (deep slumbers when camping are often a precious rarity), it was apparently still raining, for there was the sound of heavy drops thudding onto the tent above my head. The sky outside seemed to have grown lighter so I assumed that dawn was approaching. And it was cold, shiveringly cold. The sort of cold that makes you wish your sleeping bag was thicker and that you hadn't left your spare blankets in the car.

Not quite wide awake, I scrambled out of bed and stumbled towards the exit, crackling as quietly as possible across the sewn-in groundsheet  (why can't they sound-proof those things) and un-zzzzipped the front door twice: one zzzz for the anti-bug door and zzzz one for the outer door.

Then I peered out into a scene so sublime, so silently sensational, that I gasped in delight. A 'Wow!' of wonder escaped me. My face cracked open in an enraptured grin. This wasn't dawn. This was (I found out later) not even one o'clock in the morning. The raindrops on my tent were drops from the trees, the clouds had rolled away and Night had cast aside her mantle.

Night makes us think of many things: darkness, danger, tiredness, cold. In our tents we might listen to the hoot of an owl (possible), the song of the nightingale (unlikely), the churr of the nightjar (who are you kidding?) or more prosaically the roar of a passing motorbike and the rumble of a passing articulated lorry. But what do we see? Dimness, vague shadows in the gloom.

Nothing prepares us, not even hope, for a land laced with silver, a realm of liquid shadows and silence, where even hushed speech is like a spreading stain. The moon drifted above the inky trees, white and full. A full moon is a friend, a tangible thing, whereas a full sun is a devouring ball of fire who blinds.

And Night is a wonder we cannot capture. I tried. In the silver light, I hurried back into the tent for my phone and tried to take a picture for posterity. Here it is... Pretty good, right? 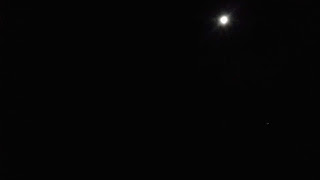