Our Son's First Day at School 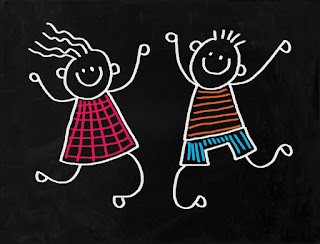 Graham is bouncing on the bed, the light green sheet that covers him rocketting upwards with every kick, head rebounding off the pillow.
"Better get a good night's sleep," I tell him, "else you'll be too tired tomorrow."
"I'm so excited!"
Bounce, boing, ka-boing! The sheet flies into a rough triangular mountain under the impetus of his knees.
"Good night." I cross to the door, flick the light switch and leave him to it. 'Please sleep', I think to myself. 'Please don't be tired for tomorrow.'

The long wait is over. In the morning, Graham starts school. The first tiny step on a long, long journey. By the time he comes out he'll probably be as tall as me and trying to steal my shaving foam - provided it's a cool enough brand.

But let's not think of it that way. I remember my first day at school - slightly. I recall excitedly pulling on my blue school sweatshirt and feeling the thrill of finally being able to join my older brother, a dizzying three-and-a-half years ahead of me. Of course, I was the second son, able to follow life in my sibling's slipstream. Wherever I went - school, secondary school, university, even work - he'd already marked the trail. I was the 'little brother' and accepted accordingly. It is a (possible) advantage that Graham doesn't possess. Not that it has bothered him much so far.

Tuesday morning: 6.45am. A small figure comes trotting into our bedroom. I can't see him as I'm keeping my eyes firmly shut but it appears that he is fully dressed in his new school uniform and - more remarkable still - wants his breakfast. This is a boy who has been delaying the morning bowl of cereals until nearly 9 o'clock sometimes recently but that was, of course, the holidays. The holidays are over. School has begun and Graham is eager to be up, out and on his way. This is, after all, the day that he has been looking forward to for months. If he had his way we'd be arriving at school in a dead heat with the school caretaker as he comes to open up. We sleepily persuade him that breakfast will have to wait and he retreats to listen to The Jungle Book. I hear several gargantuan yawns echoing down the corridor from his bedroom, alongside deadly stories of Kaa hypnotising monkeys and Shere Khan being attacked by buffaloes. Graham is up and as ready as he can be but the early rising has not been without its drawbacks. Not that he would count listening to slightly bloodthirsty Victorian literature as being among them.

Five minutes later I swing myself out of bed and gaze drowsily out of the window. The sky is grey and the ground looks wet. Graham is unimpressed. "I wanted it to be sunny!" he complains. We point out that at least it isn't raining and reassure him that the weather is due to improve. I wander into his bedroom and find him sitting on the floor playing with his Duplo. He seems strangely young dressed in his school uniform. I had expected him to look suddenly older but it is as if the 'boy of indeterminate age' who dresses in normal clothes during the holidays has abruptly been categorised. In his normal clothes he looks as though he could be five or even six. Seeing him in uniform for the first time he looks exactly what he is: a four year-old about to begin his first day at Big School.

Later, standing tall at the front door, he looks older again. Breakfast is over. Isaac has been hurried through his morning repast at a quite unseemly rate. Daddy, overcome with the importance of the occasion, came close to forgetting his morning ablutions and nearly turned up at his son's first day at school in his pyjamas. Graham sets off proudly down the road. He walks with a rakish swagger, school book bag bumping against his hip, delighted to be on his way: a boy among boys at last. Much as he enjoyed pre-school you got the impression during the last few weeks that he was beginning to feel that he was really too old for such things. He was looking forward to the next step and not afraid to take it.

I remember how I used to feel during the last few days of the summer holidays. The dismay at realising that the apparently endless days of a joyous summer were fast hastening to a close. The sickening thought of uniform, timetables, restrictions and buses to catch. And I didn't generally dislike school.

The first day (or in Graham's case, half-day) is different. At 12.30 we pick up a boy weighed down with two paintings and loudly explaining what he has had for lunch. First day negotiated. He's still excited, looking forward with undiminished anticipation to tomorrow, enthusiasm undimmed. Yippee!!! Long may it continue.

Email ThisBlogThis!Share to TwitterShare to FacebookShare to Pinterest
Labels: Milestones