Why so SaHD, Stay-at-Home-Dad? 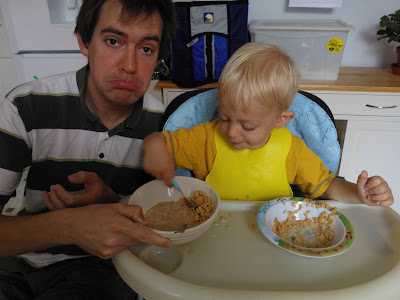 In the days when I was still among the nation's wage earners I was involved, for several years, with something called the Waste Electrical and Electronic Equipment Regulations, a brainchild of the EU and subsequently brought into UK law. Obviously having to say 'Waste Electrical and blah blah blah' is a bit of a mouthful when chatting about these things round the dinner table so they became commonly abbreviated to the WEEE Regulations.

At the time I thought it was one of the worst acronyms in existence - anywhere. I mean, did nobody in Brussels or Westminster sit down and think to themselves 'You know, that looks silly. We're going to be sniggered at for years. Why don't we switch the words round and call them the EEEW Regulations or something instead?' Apparently not, because when they had the chance to make the change they refused to do so. The WEEE Regulations 2006 (with revisions) were simply replaced by the WEEE Regulations 2013. Snickering among anyone involved with electronic rubbish seems set to continue for the forseeable future.

Since then I have swapped government regulations for a vacuum cleaner and pushchair but it appears that I haven't left the unfortunate acronyms behind.

It wasn't until I had been in the 'job' a few months that I found out that the accepted abbreviation for Stay-at-Home-Dad was SaHD (I know, I've always been a bit slow on the uptake in some things...) and I must admit that it wasn't a pleasant discovery. In fact, you could go so far as to say that it sahddened me (#ha ha #ain't I a scream? #what's a # for anyway?). It just didn't seem very dignified somehow.
"Hey pal, I'm a nuclear physicist and part-time champion dirt-track racer! What do you do?"
"Me? Oh, I'm just a sahd..."
See what I mean?

And this got me thinking about all the other possible job titles that we 'sahds' go under. They aren't a pretty bunch, truth be told. Let's consider a few.


Househusband: Yes, that's me, the one in the frilly white apron holding a feather duster and with a weeks' worth of facial hair. Hate that one.
Stay-at-Home-Dad: OK, so I am no longer 'sahd' bruv but I don't get out much either.
Home Maker: Do-little & Sons, Building Contractors, perhaps?
Full-time Father: Definitely not me. Never has been. The difference is that while many fathers disown their children when at work we sahds only get the opportunity once they've gone to bed. And if Mummy has had a long day at work and is too tired to get up when they start crying at 2am then that doesn't always happen either.

As titles go those aren't exactly inspiring are they?
So can we do a little better?
How about 'parenting expert'; on the basis of 'I do, therefore I am'? Unfortunately that's a bit like saying that the guy who rocks up at Augusta with a bag of clubs must automatically be a golfing pro. Many people are parents; very few are experts.

In exasperation I turned to the last resort: Man's best friend, aka Google.
And it was here that I discovered that the internet is sexist. Archaically sexist. Sexist to the point where it is almost Victorian.
For upon typing 'homemaker synonyms' into the search engine I was presented with the following list of possibles on Thesaurus.com:
noun: wife
family manager
home economist
home engineer
lady of the house
mistress of the house
wife and mother

Did you notice something missing there? The male role model?
Intrigued, I decided to cast my net further afield. I hammered 'house husband' into Thesaurus.com and after an extended interval while the little whirly thing on the tab bar went spinning round got back a list of advertised websites and the following message: You are seeing web results for house+husband because there's not a match on Thesaurus.com.
For the sake of comparison it is worth noting that 'housewife' produces six results: mainly the six already shown in the list above, with 'homemaker' in place of 'wife and mother'.

'Stay at home dad' was equally fruitless though the website www.synonym.com tied itself in perplexed knots trying to help. It gave me no end of alternatives for 'stay' and 'home' but none at all for 'dad'; although it did rather strangely provide alternatives for the words 'say', 'some', 'come' and 'hope' instead, just in case I hadn't spelt right. As I said before, a trifle confused methinks.

So what are we left with? Could we copy www.synonym.com's example and find alternative words for each individual part of 'stay-at-home-dad' to make it sound more catchy? A quick Google search and here we go... How about:
Abide-at-abode-begetter - nice alliterative feel to that, don't you think?
Domiciled patriarch - might have to grow my beard a bit longer for this.
Permanently residential pater - can't think of any flaws here - except that it sounds vaguely awful.
Lodge at location poppa - I'm English. I don't like poopa... I mean poppa.

That's it, I've shot my bolt. This tarrying-within-doors-daddy is utterly Google-d out. If anyone else has any helpful suggestions I'd be glad to hear them. Until then, I'd like to share with you something that I found during my internet investigations which proves that it's not only me who struggles with this question. Please take a look: http://www.theatlantic.com/sexes/archive/2013/05/wanted-a-word-to-describe-men-who-stay-home-to-take-care-of-their-families/275568/.