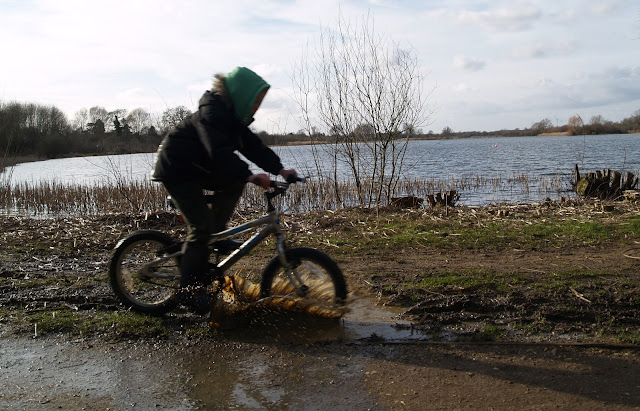 There is a theory that Spring is on its way. Like many theories it doesn't always stand up to close examination.
We have, admittedly, passed the date for the Spring equinox and gradually-expanding splashes of yellow primrose adorn the banks and hedgerows - but one wonders whether they should be blue instead of yellow. The deathly blue of intense cold.

We've had several false starts already this year. An occasional day of sunshine has warmed us into enthusiasm only to be immediately replaced by a week of clouds and rain. The countryside labours beneath a weight of turgid water. February fill-dyke, the old saying used to be. Well, we've had March fill-dyke too - and plenty of it.

Which is all good news, of course.

Not only does it delay the inevitable water shortages resultant from planting excess homes in the South East (where the majority of people apparently get most of their H2O from one single reservoir) but it also allows crazy kids to run mud-splatter-wild. Provided you have children who are happy to wallow in dirt - and pack a spare change of clothes - this type of weather can provide some of the greatest fun of the entire year.

A couple of months ago our family paid a visit to Hinchingbrooke Country Park, near Huntingdon. It consists of 170 acres of woods, marshes, lakes and open grassland. Paths of varying quality snake their way around, some clean, some squelchy. Muddy puddles abound. On the off-chance, we packed the kids' bikes but it wasn't a promising start. The road through the woods was soggy, cycling was a chore - but then...

It was after we found the custom-made mountain-bike course that the boys suddenly realised the possibilities of the place. A few skiddy downhill runs later and they were hooked. Suddenly, the rutty terrain became something to be embraced rather than endured - a two-wheel assault course, conveniently laid-out to maximise personal daring.

Isaac, being Isaac, managed to retain his sanity. Graham threw prudence to the winds. Tyres roared in the puddles, sediment-laden slush arcing into the air, splashing to earth and clothes. Brown stains saturated bike and rider and seeped to the skin. It was a riot of uncontrollable mud-moisture-mayhem.

Graham is a boy who sometimes changes his socks because he stands in a drop of tap-water. Now he was dripping, filthy and riding a bike that had once been silver and was now the colour of badly-filtered coffee.