The Dangers of Dogs, Kids and High Speed Racing

We all know that dogs can be dangerous. All those sharp, gleaming teeth, that terrifying snarling and blood-curdling barking; it's enough to make anyone into a cat-lover. Granted, there are undeniably nice dogs - I know and have known a few myself - but there are also dogs that convince us, even from the other side of a 10 feet-high chain-link fence, that their sole aim in life is to rip you apart and see the colour of your guts. Anyone who has ever watched Beethoven knows that. But did you know that it is also possible for dogs to be the means of pain and anguish without baring one tiny tooth - without even looking at you? No, neither did I, until last week...

The Race Is On 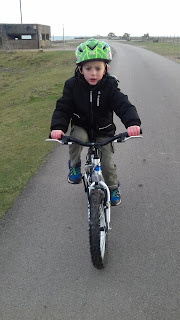 We recently purchased our oldest son a 'new' second-hand bike. He had outgrown his previous one and we promised him that as soon as he could set himself going without needing a push from either Parent we would upsize his machine. We found him a fresh bike just in time for some half-term trials and on Saturday afternoon he and I set out for a quick spin around the block, Graham astride his bicycle and me sailing along on a scooter behind him. The scooter is a relatively new innovation: I used to travel on foot but as Graham's speed increased so did the amount of effort required to keep up - there is only so far that you can run without getting puffed out - so I got a new scooter for a Christmas present so that I could whizz along at the same speed and thus far it had proved more than capable of mixing it with the juvenile pedal-pusher.

Not far from our house is a wide tarmac footpath, nice and flat and therefore ideal for cycling practice. Graham, as usual, wanted a race which generally involves some contrived stalling on my part to avoid leaving him trailing far behind. I am well practiced in giving the appearance of maximum effort whilst actually popping along in third gear but it soon became apparent that this race was following a different script. Those new, larger, 16" wheels had turned the tables and it wasn't long before Graham was surging ahead and I was having to exert some serious effort - actual effort this time - to remain in his slipstream.

The tarmac on the path is formed from two different surfaces. The central strip is quite smooth but either side it is more bumpy, therefore giving it more friction. Either side of that it falls away completely into mud and rotting leaves. Accordingly, to increase speed I took the middle strip which was also the route that Graham was taking. The trees flashed by on either side. Graham had found his stride and was pulling away, legs whirling. For the first time ever I was in danger of being honourably defeated. Only a determined attack would salvage my pride. I bent low over the handlebars, right foot kicking forcefully at the ground, and began to close the gap. Then, just as we were rounding the first corner Graham cried out.

With typical infant variability Graham has transformed over the years from a child who eagerly strokes the noses of slavering, white-fanged Alsatians to a child who runs in fright from the teeniest Dachshund. No amount of coaxing has any affect. Dogs, with a few exceptions, are Bad. Looking up now I could see a family with what looked like at least one small, white dog about thirty metres ahead. I couldn't tell whether they were walking away or towards us but, either way, they posed no immediate threat and I was just beginning to tell Graham this in my most reassuring tones when I suddenly glanced down and realised that he had slammed his brakes on, stopping dead in the middle of the path and that I was about to crash straight into him.

The next few seconds are imprinted on my memory in a glaze of whizzing concrete and spinning wheels. Avoiding disaster of some sort is clearly impossible. The front wheel jerks sideways even as I realise that I am going too fast to keep my balance. I daresay my fingers grope for brakes but this is a scooter not a bike and scooters don't have brake levers on the handlebars. The rear brake isn't good enough to stop me anyway, even if I remembered it. Panic. A solid figure, helmeted and sitting on his bike looms stationary at my left kneecap. Grey tarmac, split by a million tiny lines, streaks away beneath me. The darkness of despair. Then, the inevitable. Self and scooter abruptly part company and I go soaring through the air.

It wasn't a long flight and followed an exclusively downwards trajectory. As I watched the runway come rushing up to meet me the one clear thought in my mind was that I was about to feel some pain and there was nothing I could do to prevent it. I crashed to earth, apparently taking most of the impact on my outstretched left hand and then rolled over, coming to rest sprawled in the middle of the path, facing back the way I had come.

Somehow, I had shunted Graham through ninety degrees and into the grass verge and as I watched I saw his face crumple. "Oh no!" I thought. "Must be scared at seeing his Daddy go flying like that. Poor kid."

I had overestimated the infant well of sympathy. "Daddy!" he gulped through the tears. "You banged into me and hurt my ba-ack!" I could have pointed out that his sudden stop had also caused me a bit of suffering but I managed to bite my tongue, figuratively speaking (my tongue was one part of me that wasn't injured in the crash) and scrambled quickly to my feet. My left palm was slashed with angry, red grazes, my chest hurt, blood oozed from my right hand and I could also detect some discomfort on the big toe of my right foot but, to my relief, that seemed to be all. In the grand scheme of things my injuries appeared to be quite superficial. Although I was hardly able to use my left hand for 24 hours after the fall and still have pain in the base of my thumb a week later there was no evidence of broken bones. As the doctor said when she examined my left hand a couple of days afterwards, I had apparently "got away with it".

Graham soon stopped crying when he realised that I was in pain and begged permission to see the gory wounds. He was suitably impressed and made no demur when I told him that we had to go straight back home (where he subsequently made it his personal responsibility to cheer me up, bringing me presents and even offering to serve me breakfast the next morning). As I picked up my scooter and chided him, as gently as I could through gritted teeth, for stopping so suddenly his simple answer was, "But I don't like dogs, Daddy." It was childish logic that not even I could argue with.

Aching, bleeding and with me unable to grip the scooter with my left hand, we turned for home. Behind us, the little family and their deadly dangerous dog, unwitting cause of the entire calamity, were just disappearing round a bend in the path, having heard and seen nothing.
Posted by Daddy Do-little at 11:52:00