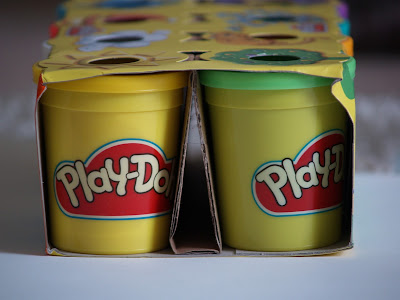 I mean, there I was, happily vacuuming - well, vacuuming anyway - when suddenly there's a commotion from downstairs. Within moments I've switched off the vacuum and I'm haring down to the kitchen faster than an arthritic snail. Isaac is in his high chair where my wife is feeding him his tea, Graham is seated at his little table and acrimony is in the air. Despite all previous warnings Graham has finally succeeded in filling his ear with homemade playdough. Unfortunately, not all of it has re-emerged.

"What'd you do it for?" I enquire, a trifle warmly.
"Because Isaac was screaming," our eldest son replies, defiant but probably sensing that his popularity status is rapidly plummetting towards freezing point.
My wife is on the phone to the doctor's explaining that we have a three-year old with a foreign body lodged irretrievably in his right ear. They recommend A & E.

A & E?! At half-past four on a Friday night! Graham gets the full benefit of a fatherly glare; his popularity status has got icicles growing on it now.
"I'll take him," my wife says.
"No, I'll take him," I say. A&E waiting times are notorious; we could be there for hours. Several hours in a hospital with an irritable infant, on a Friday evening... The mercury in Graham's popularity-meter drops another couple of notches.

Obviously, we pack a few things to while away the time in the waiting room and I eventually stagger from the car at the hospital laden down with tea for two, a bag full of books and two coats. The A&E department is about half-full. Clutching Graham's hand I weave my way over to the reception. The counter is so high that Graham's head doesn't even show above it. I hoist him into view and explain that he has a problem.
What is the problem? I reveal that the lad is suffering from a case of playdough in the right ear; the receptionist's face twists into a wry smile. After a few more questions she sends us off to wait.
After about half-an-hour a nurse calls us over. "Why did you do it?" she wants to know.
"Because Isaac was screaming."
"Well, I can see your logic."
Another wait, then another nurse.
"Why did you do it?"
"Because Isaac was screaming." Poor Isaac is growing rather a bad reputation at the moment, the oblivious source of all the trouble.
"What colour is the playdough?"
"Brown," I say but Graham is anxious to set the record straight..
"No, when we made it it was a nasty colour. It's sort of light brown." (Needless to say Graham chose the colour himself.)
"About the same colour as ear wax."
Two nurses try unsuccessfully to extract the homemade playdough with a pair of wierd scissors.
"It keeps on breaking up. We'll need to ask about getting it out using suction."
Another wait. I dip into the bag of books and listen to an elderly lady in the examination cubicle opposite explaining to her friends: "That little boy has playdough in his ear." Uh-oh, the word is out.

Eventually, a long walk through deserted corridors, self clutching Graham's little mitt in one hand and weighed down with books, tea and coats in the other. Outside, evening is falling and the hospital has the air of a place that is settling down for the night. Another set of chairs, more stories and then finally a delightful doctor who shines a light into the sufferer's ear, tells him he is a brave boy and fits up something to suck the stuff out. "No pain, just a bit ticklish," he explains, playfully tapping the air line on Graham's nose. Graham dissolves into giggles. Within minutes the offending gunk is out and Graham is presented with not one but two stickers as testament to his courage. The playdough saga is over.

And so, in a neat bit of symetry, this little episode in my life began with me vacuuming the carpet and ended with a doctor vacuuming Graham's ear. If it's all the same to you, my boy, I'd rather you let me stick to the carpet in future. Take the hint?
Posted by Daddy Do-little at 03:42:00