2018: The Tale of The Temporary Spring 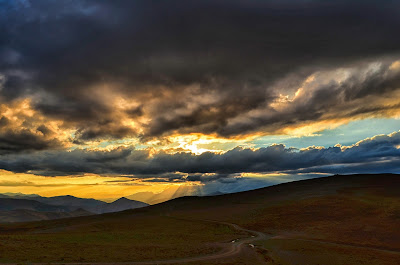 Two weeks ago, with the suddenness of the sun coming out from behind a cloud, Spring arrived upon our shores. I say Spring but actually it felt more like Summer. The sun gleamed down from a blue, blue sky and temperatures skyrocketed. Overnight, people flung off their bulky winter clothes and reappeared the next morning with all their chalky-white limbs exposed. I can't claim complete authority, but I imagine that up and down the country there was a sudden hysterical babble as everyone made a mad dash for the garden, laden down with deckchairs and tripping over the snow-boots and sledges that they had left handy by the back door 'just in case'.

2018 being 2018 this state of affairs obviously didn't last. As I write this, I look out upon a world of lead-grey skies with an all-pervading atmosphere of unseasonal chilliness, which is pretty much par for the course this year. Online, forecasters are happily predicting heavy rain, snow and potential flooding in a possibly (hopefully) last-ditch attempt to sustain Winter's vanishing aura.

So much for the present, what of the recent past? For a few glorious days we exulted in a welcome dose of sun and shine and watched as the world visibly expanded before our eyes. Skeletal trees have ceased to form Wintry friezes against a Wintry sky and are abruptly bursting into leaf, puffing up as though someone in the roots was hard at work with a bicycle pump. Flowers and blossom fill the countryside in a shower of whites and pinks.

And the change has not gone unmarked in our house either. For a few joyful days the Dolittle household went all al fresco. Lunch and dinner were consumed in the open air as we re-discovered what that biggish green space behind the family home (commonly called a garden) was really like. The children remembered the trampoline, the cover was ripped off the sand pit and we even managed to get a few loads of washing out on the washing line. The only downside, from my point of view, is that I will, at some stage, be obliged to mow the grass, which has commenced growing at an unacceptably rapid rate.

In this first careless flush of Spring I walked into town wearing a broad-brimmed bush hat, clipped up at the sides. It is the type of headgear that would be met with howls of derision twelves miles away in Ashford but in Tenterden, where there is a Waitrose just off the high street and elderly men wear maroon-coloured trousers, I doubt whether it even merited a second glance. My former Biology teacher, who cultivated a carefully maintained eccentricity, used to call Tenterden dwellers 'Spacemen' (or something similar), inferring that they were somehow a little way-out, out-of-touch and generally loopy. Living eight miles away at the time - and being more of an Ashford-native than otherwise - I found nothing to resent in the description. I still don't, even now that I have joined their ranks. Any society that can embrace maroon-coloured trousers and patterned leggings and treat both abusers of fashion just the same is a society that is unlikely to laugh at my bush hat, which can only be a good thing for me.

Wild weather may well be heading our way over the next few days. Those people who have purchased blow-up paddling pools in the first optimistic surge of sunshine may find that they are having to use them as rafts when they put the bins out on Tuesday morning but at least, as we draw our armchairs closer to the fire and reluctantly unpack the recently-packed long-johns, we can all have the comfort of memories of sunny days gone by; those few brief hours of warmth that may - who knows? - come again.