Is There a [Child] Doctor in the House? 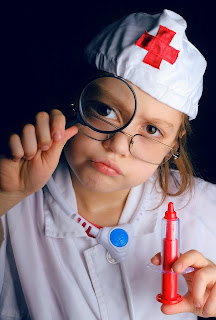 The modern system of education accepts that children are not mere empty vessels, patiently waiting to be filled but are capable of distributing and analysing information as well as receiving it. They are, in fine, Givers as well as Receivers.

This is amply demonstrated in our house. Should I require (for example) a description of the Red-backed Shrike*, I would not go to an adult for help, but to Graham, secure in the knowledge that he will have the information at his fingertips. Data regarding the world's best colour (blue), the world's worst football team (Tottenham Hotspur) and the shortcomings of broccoli are available from the same source. That's Graham.

If it's medical assistance you want, however, you ask Isaac.

A few months ago I wrote a blog entitled 'Is Calpol the answer?' coming to the conclusion that, so far as infant ideology went, it probably is. I have since revised that view. Isaac has shown me that juvenile physicians are no one-trick-ponies; the medical field is wide and they are prepared to use every part of it at their disposal.

On Saturday afternoon I was suffering from a slight headache, a result of spending two-and-a-half hours labouring in the midday sun which, you will recall, is the sole preserve of mad dogs and Englishmen. As a born and bred member of the latter (if not the former?) class I was obviously obliged to mow the grass at a time when most sensible people are taking a nap. The results were uncomfortable and I retired to the sofa to relax and ease my throbbing temples while Isaac played with Duplo, regretfully declining his invitation to join him and explaining that I needed to rest my eyes a little as I had a bad head.

A look of quite professional sympathy came over his face: Doctor Isaac was Concerned and this Concern did not find him Inactive.

So it was that Gilly came in a few minutes later - self having dozed off - to find Isaac carefully daubing my unconscious scalp with copious dollops of aqueous cream - 'for dry or chapped skin conditions' - in an attempt to alleviate my sufferings. The instructions on the bottle state that the formula is FOR EXTERNAL USE ONLY and Isaac is a conscientious practitioner. The good Doctor had refrained from making me drink the solution but this did not prevent him from smearing it generously into my hair, working it well in with the palms.

Gilly, as previous readers of this blog will know, is not absolutely sympathetic in such situations and immediately dissolved into giggles. Isaac, slightly perplexed, was relieved of his self-imposed responsibilities and I was summarily dispatched to have a shower with instructions to lay the shampoo on nice and thick in the affected area. And it is worth noting that I emerged from the shower feeling considerably better so it may be that Isaac's prescription was effective, although the soothing waters and two paracetamol caplets I took could also have had something to do with it.

And so Isaac's little store of medical knowledge and expertise increases and one feels that it can't be very long before he is confidently applying bandages to grazed knees and distributing throat lozenges to anyone with a tickly cough. He is already advising Gilly to lie down when she has back-ache and was actually engaged in eating an apple - every Doctor's Daily Dose - shortly before applying the cream to my poor, aching head.

Even so, I think I'll leave the catch on the medicine cupboard for a while longer. I don't think he's quite up to mixing Dioralyte just yet.


*Migratory, carnivorous passerine bird and member of the Lanius (from the Latin - 'butcher') genus and Laniidae family. Male has reddish upper parts. Now you know.