The old year is meandering to a close, the world is full of '2015 Reviews', Christmas is over and many people will probably be feeling a little flat. Christmas is like a wedding that happens every year: all that excitement, all that build up and then SNAP!, it's gone and we've got to wait nearly a whole week until the next bank holiday. Same old story, time after time; year in, year out.

Yet for me, overcoming lethargy and determined to rescue something from the common wreck of December 29, it's been a day of firsts. First of the firsts was getting up early to see the sunrise, something which I have never contemplated doing voluntarily even though brother-in-law Matt has often recommended it as one of his favourite times of the day. I emerged bleary-eyed from between the sheets before the light was even in the sky which critics may point out is a great deal easier in the Winter when first light isn't until 7.30 and the sun doesn't poke his head above the horizon until 8.10. Against this I would remark that Winter mornings are colder than most so venturing out is that much harder. No matter, I stumbled into the bathroom and sloshed water about a bit before descending to the kitchen where Matt was already munching breakfast, looking rather more chirpy than I was. We drove through a slumbering world down to the coast, where the first wan beams of light were showing in the sky. The moon was out but he was fighting time and as we walked along the cliff the sun finally rose through the clouds, shedding a glaring beam over the rushing sea and bathing the chalky cliffs in a yellow glow. Worth getting up for? Definitely.

In the afternoon, my second first, as I assisted Graham with bucket and spade on Lyme Regis beach. My first Winter sandcastle built and (subsequently, rapidly) demolished. Graham was exhibiting his usual beach enthusiasm; sand was going in the bucket, in the air, over his arms, down his neck and I began to exhibit the usual hunted expression of a parent who spends most of their time saying, "Don't do that!", "Stop!", "Be careful!"

Eventually, as the the cold was beginning to seep into our bones, I was permitted to stagger from the beach and take up my dejected stance in Graham's wake as we headed off for a walk round the harbour. There had been a lot of rain and Lyme Regis was plentifully supplied with large puddles which splashed satisfyingly when a small boy in wellies jumped in them. With a harrassed father trotting behind bleating occasional warnings to "keep away from the side, please," Graham proceeded happily from puddle to puddle, waving his spade energetically around him. The sparkling drops splashed into the air, twisting and twinkling and it wasn't long before increasing quantities of water found their way onto Graham's trousers and down into his wellingtons.

"Mummy, my trousers and socks are wet. I want to take them off!" He spoke with the calm assurance of a child who knows that whatever havoc he can cause his parents will find a way of dealing with it.

Not on this occasion however. "Well, you can't. We haven't got any spare clothes for you."
"Keep your boots on," I urged. "It's warmer that way." I spoke from experience, having had much water in my boots from paddling around in ditches as a child.

It was the first sunny day for who knows how long and Lyme Regis was packed to bursting. The car parks were crammed, swarms of people roamed the town and beach, small children whizzing about on scooters vied for pavement space with prams and pushchairs, the chippie had a queue out the door and the refreshment stalls were working overtime. Except that there wasn't anybody bathing and everybody was muffled up in coats and hats against the wind it was almost like a Summer weekend. The wind was vicious though. The windsurfers and kitesurfers out in the bay liked it but we did not share their pleasure. It rasped around us and made us cold. Graham, having taken on more water, stopped to complain once again that he was wet and wished to remove his trousers and socks. Once again we dissuaded him.

To cheer him up Gilly gave him a choice:
"You can go on the beach again or you can have an ice cream."
Adults, of course, would have chosen option (c) 'Neither of the above. Go and buy a coffee' but kids are made of sterner stuff.

"Can I have an ice cream please?" 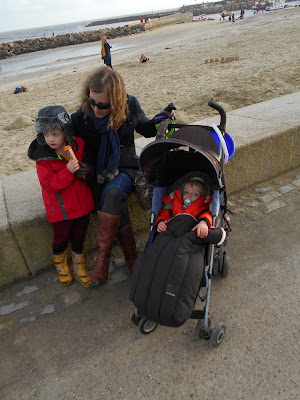 We queued up. Ice creams were doing a roaring trade and I pondered whether I should have one myself and make it three firsts (first ice-cream in December) but decided I was too poor to throw away money on a whim. I bought Graham a freezer-fresh Calippo instead.
It was too cold for him to hold so Mummy got the job of feeding it to him. He squelched along the front, feet and lower legs immersed in water, hat pulled down over his ears to keep off the chill of the wind, coat hunched up around his ears, looking extremely cold and eating flavoured ice. I have rarely seen anything more incongruous.
He stopped and let out a piercing cry of agony. "Mummy, my throat hurts! The ice cream is so cold!"
"Well, shall I throw it away?"
"No, I want it."

We finally got back to the car, tired, careworn and more than a little bit blue around the gills. Graham finally had his wet clothes removed and was wrapped in a dry blanket. Gilly packed everything away and Isaac, who had sat cosily and uncomplainingly muffled up in his pushchair all afternoon suddenly remembered it was his teatime and gave a yell. We piled into the car, turned the heating up and headed homewards. December 29? A day to remember.
Posted by Daddy Do-little at 14:06:00