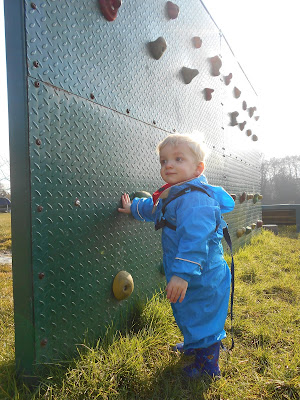 The year is advancing. In the South, at least, it appears that Winter is pretty much on the ropes. There's been a few late punches: a handful of morning frosts, even a few flakes of snow but they're the feeble gestures of a beaten fighter. Spring is in the ring: there are primroses blooming on the banks, longer evenings, bluer skies and Winter's guard is down, he's throwing in the towel.

Truth be told, he was never up for the fight at all, at all. This was a Winter high on days that felt like November but low on days that a proper Winter should produce. A season that is supposed to bring forth tingling hours of snap and frost ended up generating about as much seasonal sparkle as a broken set of Christmas lights. Illness - coughs, colds, runny noses - rioted unchecked. Isaac succumbed once, twice and again; his mood was so glum, his throat was so sore that at times it felt as though he would exist only on the baby food that he should have stopped eating months before. A final bout hit him a couple of weeks ago and persisted grimly for several painful days before the smile eventually returned to his face. He's hardly stopped smiling since. It will not be long before the wood anemones, those dainty earthbound stars, will be twinkling out in the oak woods. I doubt if they will look any happier than our little boy rejoicing at overcoming yet another cold. I hope it's the last for a while and I hope, with a sigh of regret for things I wished to see and didn't, that this bug-ridden season is finally down and out.

If so, Spring may usher in some days of great excitement for Isaac, who has realised over the past few weeks that legs can really take you places. No longer content with pottering up and down the hallway and occasionally sneaking through into the kitchen he has begun to cast wistful eyes in the direction of the wide, wide world outside the front door. Sometimes he is even permitted to find it, held in check by reins but, crucially, out of the pram and walking on his own two feet. 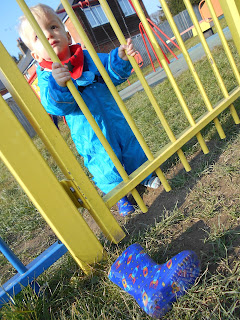 There is, even so, a minor problem. Graham, fortunate fellow, learnt his steps when the ground was still hard from the Summer sun; Isaac has Winter mud to contend with - not good on shoes, not good on trousers. Therefore I decided to put Isaac in waterproof suit and wellies for our trip to the park yesterday, hoping to avoid problems. The waterproof was a good idea; the wellies didn't work out quite so well. They showed a deplorable tendency to slip off whenever the going got slightly tough. Rough ground and unruly tufts of grass both combined to trip Isaac up at regular intervals and every time he rose he usually left at least one boot behind him. I spent much of my time scooping Isaac onto my knee to replace errant footwear which would then fall off again a few seconds later. Isaac wasn't bothered. As far as he was concerned the boots were an irritational extra; a dutiful Daddy who kept picking him up was also an irritant. Muddy socks were a small price to pay for freedom.

I didn't give up, although sorely tempted, and eventually the gaps between pick-ups lengthened as Isaac began to find his feet. I let him roam free without holding the reins and he toddled happily around the play park examining the equipment with earnest concentration. Graham, who had come along with us, went off by himself. He returned home fairly clean; muddy socks Isaac, less so. Hey, the grass was dry, the mud was drying, the sun was shining, the sky was blue. This is it, Spring is here, here to stay and the world awaits, mud, muck and all.
Posted by Daddy Do-little at 14:30:00