Biddenden Tractorfest - A Great Day Out

'Tractor' was one of the first words that our eldest son, Graham, ever articulated. Being a country boy, with a farming lineage, perhaps this isn't surprising and, aged nearly 4, he is now confidently identifying the output of several different manufacturers - John Deere, New Holland, Massey Ferguson (he calls it 'Maggie' Ferguson) JCB and Claas. Not quite so good with Case, Valtra, and a few of the other brands but we'll get there.

So, a couple of years ago, when we heard that a local village was starting up a new show called the Biddenden Tractorfest we hadn't the slightest hesitation in turning up for the first day of the event. Unfortunately, it wasn't an auspicious opening as it rained hard for the entire day. The small number of spectators hurried from shelter to shelter and squelched around doggedly to inspect the equally small number of tractors on show and overall the experience was more in keeping with the stuttering performance of the battered tractors I have so often driven than that of the techno-behemoths of the modern age: enjoyable but flawed. 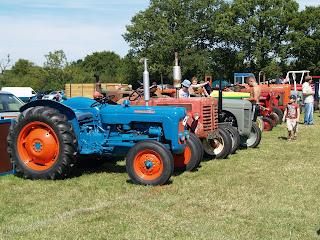 But the organisers didn't give up and having missed last year's event we turned up today to be confronted by something grown suddenly bigger, better, noisier and (massively, scorchingly,) sunnier. The temperature was approaching thirty, the traffic was flooding into the car park field in an unbroken stream and the queues were stretching back in droves from the entrance gate. Beneath a searing sun the horizon was bright with the gleaming tops of tents, caravans and gazebos. Hordes of happy children, pushchairs and slightly harrassed parents could be seen in every direction. Clearly, this year things were going to be a little different.

And they were. Tractorfest was alive with row upon row of stalls and sideshows of the type that suddenly sprout from nowhere at Country shows throughout the summer. There was a ukelele band, a clown, a chance to win a Mini, animal handling experiences, a glass box with a bed in it, many food vans and several of the over-priced type of rides and games which children love and parents dread.
"Daddy can I go on that?"
"OK, just let me find some money."
"Mummy can I go on that again?"
"No, it's time to get off now."
"Ooohh! Why?"
"Now!"
"Don't want to!"
"One - two - thr-"
"Ooohh!"
"Mummy, can I go on on that?"
"Maybe later."
"Mummy, can I have some sweets?"
And so on... 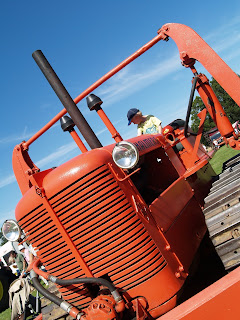 Of course, there were also rows and rows of (mostly older vintage) tractors, several old cars, a traction engine, a mini traction engine giving trailer rides (this was free so we parents liked it very much) a helicopter and a giant fairground barrel organ which played jolly tunes. Graham's undoubted favourite was an enormous orange 1942-vintage bulldozer which was made extra fun because it had many different levers to pull, switches to turn and a seat wide enough for three children to sit side-by-side. Unsurprisingly, competition for this gargantuan glory was intense. The owner stood by, smiling a wry smile and explained to me that he had discovered it covered in brambles in a farmyard.
"Must have been a lot of brambles," I observed, for the thing was about eight feet high.
He nodded sagely. "It was."
Graham had discovered a fascinating pedal on the floor. "I wouldn't press that," the owner said, "else you'll be going though to Australia. That what starts it and once it starts it won't stop"
"Smack through that caravan?" I asked, looking at one situated just opposite.
"Yes."
Mercifully. Graham removed his foot.

It is because of experiences like this that Tractorfest still maintains the feel of a local show. Many of the arena demonstrations and stalls were by local groups and individuals. Tractor owners were happy to let children swarm all over their cherished machines without demur. For a small boy I doubt if there are many greater delights than sitting high on a hard metal seat, a large steering wheel clenched in both hands, an enormous gear lever in front of you, lord of all you survey.
And, let's remember, with any number of opportunities to repeat the experience ad infinitum - well, for the rest of the day anyway. We'll be back. 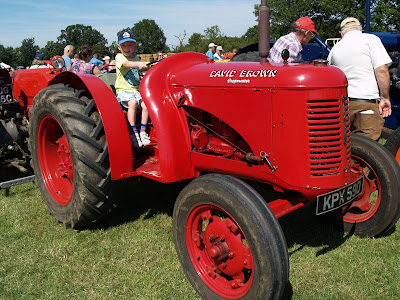