Parents, Are You Prepared? 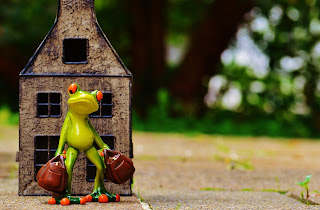 As usual, I put Isaac to bed straight after dropping Graham off at pre-school. This particular morning, though, he didn't want to go to sleep. Angry cries came floating down the stairs from behind his bedroom door. Eventually I strapped him in the pram and went for a walk to town instead - there were a few things I needed to get anyway. I was nearly there when I noticed. I faltered in my step...

I faltered in my step, my normally vigorous stride breaking helplessly in confusion. Why hadn't I thought of it? Why? My heart dropped into my boots with a despairing thud...

Of course, being prepared for anything does have its drawbacks. First and foremost, it takes time. It also takes a great deal of organisation. Hey! You got the changing bag? Yeah! Got spare nappies? Yes. Got wet wipes? Yes. Got spare dummies? Check. Spare clothes? Yeah. Muzzies (muslins)? Check. Spare bottles and milk powder? No. Well go and get them then. Actually, don't bother, I'll get them. OK. How cold is it out there? I dunno - feels cold in here. It always feels cold in here! Pack a couple of extra blankets just in case. Yeah, alright. Got the pram ready yet? No. Waterproof rain cover? No, where is it? Under the stairs! Come on, we'll never get out the house at this rate!

My heart thudded into my boots. Now what? Nearly a mile away from home now. Should I go back...?

After about an hour we'd finally have the car packed with more luggage than Scott took with him to the Antarctic. It looked to any passer-by as though we were preparing to set off to discover the source of the Nile - and were making sure we had plenty of leeway, baggage-wise, for the return trip. Actually, we were just going down the road to Grandma's, a monumental eight miles away. Finally, after wedging the last bag into the boot I would collapse into the driver's seat. Gilly, looking worried and worn out, would turn to me with a sudden frown.
"Did you pack his hat?"
"No." (Sighs) "I'll go and get it."
"Thanks. Would you mind fetching his spare blanket while you're at it? I don't want him to get cold if the car breaks down."

I have to admit, in fairness, that even before we had children this wasn't an unusual state of affairs in the Dolittle household. We would pack what we considered to be the bare essentials for a week's holiday and the car boot would be full to overflowing. There was one famous occasion when Gilly's sister and her husband came along too. We packed the car - an elderly 1.0L Vauxhall Corsa - and piled in. Old Faithful refused to start. I twiddled the key several times to no effect. Everyone got out and I tried again. No go. The extra weight of all that baggage was just too much. Fortunately, as time was getting on and we had a plane to catch, there was another car we could use. We caught the plane and enjoyed the holiday but the Corsa never recovered and had to be scrapped soon after. Sorry, love.

Actually, on a personal note, things have improved since those careless days of youth. Now, instead of having several bags each my wife and I contrive to squeeze most of our stuff into one (large) suitcase. We have a bigger car now and still fill the bootspace but it's mostly crammed with things for the children. Strange to tell, we don't seem to require any more room with two children than we did with two. Huh? Pause for thought... Why? Why? Are we getting careless, casual, reckless even?

The changing bag has been left at home. Oh me, oh my! Now what?
Er, well, I have my wallet in my pocket and there is a supermarket in the town. From such a place one may, if occasion demands it, purchase any baby essentials such as nappies, food, etcetera, without difficulty. They may even have a special offer running on wet wipes.
My faltering stride lengthened again, my heart returned to its usual position and on I went. After all, I thought, home is only a mile away.

So there you have it. The answer is to have your credit card handy and a washing machine available at journey's end. I'm prepared. Are you?