On Monday it was a train made from furniture, on Tuesday Graham wants to build a lifeboat. Construction materials are far from plentiful, particularly as most lifeboats these days are constructed from fibreglass, but eventually Papa unearths a large cardboard box in the garage and Mummy gets to work with a pair of scissors and some parcel tape.

Graham bids a fond farewell to any family members who happen to be present on-shore.

"Goodbye, I'm off to Journal-Wrack. It's a long, long way away in a big country so I'll see you when I get back. There's going to be battles and fights."
Sure enough, the first battle takes place before the ship has even been launched when Isaac crawls rapidly across the boat-builder's yard (aka, the lounge floor) and attempts to board via the bow.
"Get him off!" shouts the shipwright, hastily plying parcel tape. "He's pulling it apart!" 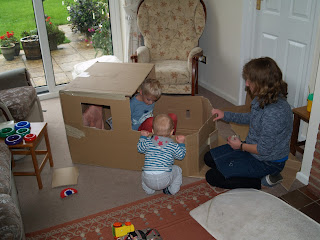 Isaac is forcibly removed from the scene to go and play elsewhere but Cap'n Graham is now anxious about the delay the unwanted stowaway has caused.
"Mummy, I'm going to be late for Journal-Wrack!"
The shipwright informs him that launching is not yet possible as the vessel isn't sufficiently seaworthy and so the commander turns his attention to the possible marine life that he might encounter en-route which, as it encompasses 'jellyfishes, octopuses, squids and sharks' is set to be both numerous and varied.


Eventually we are ready for launch and Captain Graham, sole commander, crew, navigator and ship's boy of the as-yet-unnamed lifeboat is propelled forth upon the watery deeps. Despite the distance that he apparently has to travel, rations for the journey are limited but the cabin is comfortably upholstered with two cushions and he has a copy of The Children's Encyclopaedia of Oceans aboard for reference and, presumably, navigation although the map inside is not particularly detailed. Perhaps he'll be charting his course using the stars instead.

Information on the whereabouts of Journal-Wrack is not plentiful but I assume the vessel is taking a northerly course around the Arctic Circle because it isn't long before the cry of 'Icebergs Ahoy' is heard on-board ship. It is only at this point that it becomes apparent that the shipbuilder has failed to install a rather crucial part of equipment.

"Oh no! We're going to crash into an iceberg!" comes the cry. "I need a steering-wheel!"
Crisis point has been reached and with the iceberg bearing down on our hero the shipwright quickly gets busy with scissors, a bit of cardboard and a pen. In the nick of time a cardboard steering-wheel is presented to the Captain and evasive action is taken. 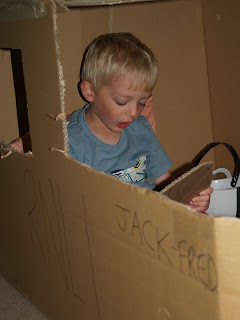 A bit late everyone decides that it is time the ship had a name. The Captain chooses 'Jack-Fred' as suitable for his gallant vessel and the voyage recommences.
"I'm at Journal-Wrack now, Mummy," Cap'n Graham announces. "You can't talk to me while I'm at Journal-Wrack Mummy 'cos you're at Nanny and Papa's house and Journal-Wrack is at a different house."
I ask what he can see around him.
"There's lions, bears, tigers, big sharks, barracudas, fish, jellyfish and last of all is a piranha," announces the captain. Poor, lonely piranha... There is no mention of any squid or octopus. Maybe they aren't found near the Arctic Circle.

The maiden voyage of the good ship Jack-Fred is over. Dangerous, iceberg-encrusted waters have been successfully crossed, deficiencies in the ship's apparatus have been overcome and journey's end has been attained in a land seemingly abundant in wildlife but apparently without any outstanding natural features to catch the adventurer's eye. I'm looking forward to the next trip. Perhaps the piranha will have found a friend by then?
Posted by Daddy Do-little at 13:12:00