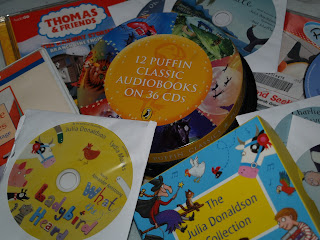 Every parent faces certain challenges and how to keep the kids occupied must be one of the most common conundrums of them all. Some parents stick them in front of a DVD, some lock them inside the trampoline, some fling open the toy cupboard and some (the conscientious ones) spend hours playing with them. Most will probably end up doing all of the above at some point.

As well as all those things (and several more) we have an alternative: audiobooks. Preferable to DVDs because they do rather more for a child's imagination they have the same benefits of keeping Graham quiet and still for as long or as little as you want. He can also do other things such as drawing, playing or eating while he is listening and of course they are great for expanding language. No end of little phrases pop up in conversation which Graham has learnt from listening to stories. For example, he once told me, whilst out bike-riding, that he was 'bucketting along with flying wheels' (Thomas the Tank Engine) and later confessed to 'driving like a maniac' (Fantastic Mr Fox).

There are drawbacks: I now know some of the stories by heart and we have destroyed at least one CD player through over-use. Some of the things Graham has picked up are not wholly beneficial. In the Thomas the Tank stories, for example, the engines quite often say 'Pooh!', which I guess is the nineteen-forties/fifties version of 'yeah, right!'. Graham didn't quite realise this and we've been working hard ever since to wean him off using it. Overall though, the pros outweigh the cons and if a child likes stories then getting in a few audiobooks is recommended. Audiobooks are expensive to buy but many can be obtained from the library which saves money and also means you can send them back if you don't like them.

So which books? Well, for the record this is a list so far in no particular order, as many as I can remember:

Graham enjoys
1) Ladybird Tales [Fairy Tales] The Complete Audio Collection. Retold by various authors. Read by Wayne Forester.
2) Pingu. Hide and Seek and other stories. Read by Sarah Greene.
3) Thomas & Friends. The Railway Stories. Author: Rev W Awdry. Read by Michael Angelis. - Classic
4) Peter Pan. Author: J.M. Barrie. Read by Vivien Heilbron & David Rintoul.
5) The Wizard of Oz. Author: L. Frank Baum. Read by Kerry Shale - This is read by an American so Graham is currently convinced that the story is actually entitled 'The Wizard of Aarz'.
6) Alice's Adventures in Wonderland. Author: Lewis Carroll. Read by Susan Jameson & James Saxon.
7) The Secret Garden. Author: Frances Burnett. Read by Helena Bonham Carter.
8) The Railway Children. Author: E. Nesbit. Read by Jenny Agutter. - Graham also enjoyed the film - the 1970 version starring Jenny Agutter as opposed to the 2000 version which starred Jenny Agutter.
9) The Julia Donaldson Collection - includes The Gruffalo, The Gruffalo's Child, Charlie Cook's Favourite Book, The Smartest Giant in Town, Room on the Broom, A Squash and a Squeeze, The Troll, The Snail and the Whale, The Gruffalo Song and other songs - Author: Julia Donaldson. Read by Various
10) The Lighthouse Keeper Stories. Author: Ronda and David Armitage. Read by Jean Waggoner.
11) The Large Family. Author: Jill Murphy. Read by Miriam Margolyes.
12) A CD with some children's tales. Can't remember details but had it on umpteen times in the car.
13) Fantastic Mr Fox and Other Animal Stories. Author: Roald Dahl. Read by Various. Decided after listening to it that it wasn't that suitable for a three-year-old. Unfortunately it was by that time one of Graham's favourites - good thing this was a library one.

My personal favourite? The Large Family. Very funny stories by Jill Murphy about a family of elephants who live in a house like you and me and their (frequent) mishaps. Beautifully read by Miriam Margolyes it stands up well to being played over and over and over again. Also much more suitable for the 3-4 years age range. Some of the others (e.g. The Secret Garden) are really a bit old.