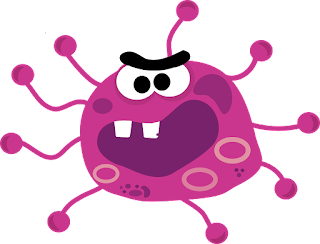 This blog has been absent for a while, more than partly because the Dolittle household has been brought low by a nasty sick bug that is doing the rounds at the moment. It has worked its way steadily through the family over the past week, with various degrees of virulence but now the end seems to be in sight. We are gradually struggling back to health with the aid of buttered toast and crackers (jokes about roast dinners, bacon and fry-ups NOT appreciated) while congratulating ourselves with the thought of all the money we've saved on food over the past few days. Forget the Atkins method, the Dolittle diet can do wonders for the waistline.

As hinted above, every cloud has a silver lining and for Graham this has meant extra time to spend in his room, not generally his favoured playing area but currently rendered attractive by the acquisition of a new table lamp for him. Since this was installed Graham's bedroom has scarcely seen the light of day; the curtains are kept tightly drawn, the new lamp is permanently on and Graham exists in state of semi-darkness, like an eternal dawn where the sun never rises. Any enquiries as to whether he'd like to take a peek at the sky once in a while are either met with flat refusal or a blank stare. At least it means that the idea of lying a-bed whilst recuperating has not been as unwelcome as it might otherwise have been.

I'd like to finish this blog by sharing a little story with you. It's got nothing to do with anything I have written but will, I hope, enlighten what has otherwise been rather glum and gloomy fare.

It concerns a young acquaintance of mine who was taking a shower recently when his mother came into the bathroom to find him vigorously massaging shampoo into his shoulders. Obviously she was a tad mystified by this behaviour and asked her son just what he thought he was doing. He looked up at her (in her own words) 'like I was a bit dense' and replied, "Look at the bottle - it says Head and Shoulders!"