Graham and the Iris Leaf 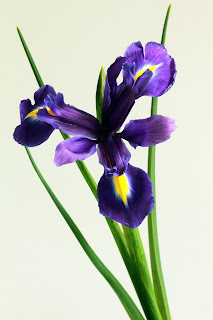 Lunchtime on my thirtieth birthday. I was rushing around trying to do three things at once, my wife was arranging some flowers and Graham, having finished his lunch, was looking at an iris leaf  that my wife had given him to investigate from the bouquet. I hadn't had lunch yet although I'd been trying to make some sandwiches in the intervals between feeding Isaac, cleaning Isaac and washing clothes. Finally I finished making my sandwiches and, as it was a nice day, I left them on the table while I hung the washing out on the line. This job complete I came back in and bolted my food down as quickly as possible because Isaac still needed a nappy change.

My wife came into the room.
"Graham, have you been using my scissors?
There's no shaking Graham. When it comes to owning up to his misdemeanours he's nearly as honest as the late George Washington himself, although I feel it's unlikely that Graham will ever follow in his footsteps and become President of the United States. Yes, he admitted, he had borrowed the scissors to cut up the iris leaf that he had been playing with. And, he added with a boyish chuckle, he'd taken some of the leaf that he'd cut up and put it into Daddy's sandwich!

There was a moment of stunned silence. My wife's eyes nearly bulged out of their sockets. Then she staggered into the dining room, collapsed into a chair and began to snort.

The birthday boy was less amused.
"But I've eaten it!" I protested, with a voice in which recrimination, shock and dismay were nicely blended. Yes, I'd eaten it and I was blowed if I knew how I was going to get it back again. I had visions of hospitals, ambulances, stomach pumps. A sort of dumb horror came over me.
My helpmeet's wheezing continued unabated.
"What if it's poisoned?" I demanded.
Her mirth subsided slightly and she reached for the laptop. "I'll just check," she said.

A few minutes later she called me back into the room. "Um, it looks like it might be actually."
I could see a picture of a skull on the page she was looking at. Surely not! Please not!
She began to read through the information. The good news was that apparently eating iris is not fatal. Relief washed over me.
Apart from that the data was rather mixed. Some said that any part of the iris was bad to eat, while others claimed that only the roots and/or bulbs were toxic. As to what would actually happen to me nobody seemed quite certain. I might experience nausea, excessive salivation, diarrhoea, skin irritation, vomiting and fever or, as irises are more harmful to dogs and children, I might get away with nothing.
"How much did you put in Daddy's sandwich?" my wife asked.
Graham indicated a piece of about two centimetres.
"That's only a small piece," my wife said encouragingly. "I think you should be ok. Better ring the doctors anyway though."
"Well, you do Isaac's nappy then," I said, a trifle hysterically.
"OK, I'll do Isaac's nappy. You ring the doctors."
I rang the doctors. The lady on the other end of the line asked how she could help.
"I'd like to ask for some advice from a doctor," I gabbled.
"So you'd like the doctor to call you back, is that it?" she enquired. Her tone was flat and unemotional. It was as though I was a decorator who'd simply rung up to ask her what colour varnish she'd like for the surgery doors, rather than a seriously emotional patient. "What's the name please? And the first line of the address? Number? What was it you said you'd eaten? Iris leaf. OK, I'll ask the doctor to call you back."

I put the phone down and went back to my work with an uneasy mind and - was it my imagination or was it real? - a queasy stomach. I could feel the saliva washing around in my mouth - it said excessive salivation was a sign. What came next? Nausea? Vomiting? Was there really any point in cleaning the toilets? I might be needing them quite soon if the worst happened. Oh well, might as well do them anyway, it would keep me occupied. I leant unsteadily against the kitchen worktop, wondering if I really was going to be sick. The feeling passed.

The minutes and hours passed too and still I remained mobile. Graham was rushing around in his superman outfit, Isaac was playing happily in the hall. Neither of them were remotely concerned about the cloud which sat suspended over their troubled parent. The doctor called me back, sounding as sympathetic as ever. What was I concerned about? I explained about the nausea and vomiting. He did a bit of thinking and decided that I didn't have anything to worry about.
"Obviously we wouldn't recommend eating it but I think you'll be fine. If you do have any problems - a bad night - then contact me in the morning."
I thanked him brokenly and put the phone down feeling suddenly stronger. Then I headed purposefully for the kitchen. There was a large slice of iced cake in there which I'd decided against eating for lunch after the catastrophe unfolded. I felt that, after a delayed introduction, the time had come for that piece of cake and me to get together for a while.

My birthday went pretty well after that.
Posted by Daddy Do-little at 04:17:00