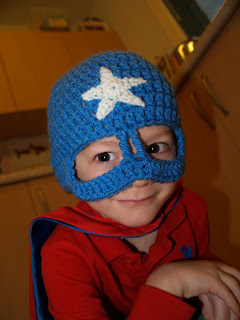 Thanks to Children in Need, last Friday - Nov 13th - was Superheroes Day at Graham's pre-school. For about three hours the little mobile classroom was bursting at the seams with enough superstar magic in the shape of minature fairies and supermen to send the place into orbit. My wife, Gilly, had made Graham a superhero-type outfit with a crocheted hat, a Superman pyjama top purchased from Primark and some red trousers. Finally there was a red-and-blue cape cut to size and then sewn together with two poppers to hold it in place, which floated out dramatically when Graham sprinted up and down the hall.

Graham was very pleased with this. Several days before the event he was excitedly announcing to his pre-school teachers, "I've got a cape. Mummy made it for me during the night!"
I had a sudden vision of Gilly hunched over her needle in the wee sma' hours, sewing away busily by the light of a guttering candle. The reality - a sewing machine and electric light - was more prosaic but probably got the job done quicker.

I did not volunteer and was not asked to contribute anything to the process. There was good solid sense behind this. I am adept at making a fool of myself and a lifelong expert at making a mess but otherwise slightly limited when it comes to creative construction. It was ever thus. My juvenile attempts at manufacture must have kept the school staff room royally entertained. First I tried making a keyring in the shape of my initials but the end product looked more like a badly-shaped piece of plastic with a random squiggle across the middle (probably because it was). Nevertheless I used it proudly for many years. Then I turned my hand to clock-making but, despite all the hours I lavished upon it, the clock resolutely refused to repay my efforts by telling me the time. Other, less memorable, endeavours followed.

From this you will gather that I chose to study 'Resistant Materials' in preference to Electronics or Graphics for GCSE not as a result of any dazzling talent on my part but because I was obliged to undertake a technological subject and my attempts at hammering and sawing were a shade less horrific (and more enjoyable) than my attainments in soldering and drawing. The teacher groaned when he saw me shambling into class, tore a few more strands of hair from an already thinning pate and presumably vowed to avoid me as much as possible thereafter. He found better material in my colleagues who produced some wonderful creations for our GCSE projects. They were works of art, a joy to behold. I, in contrast, devoted much honest toil to the construction of a CD rack made, if memory serves me right, from MDF - the fumbler's friend. The result was suprisingly solid but incomplete (the original design had been fitted with a door which I never had time to finish) and uninspiring. It is one of my greatest achievements that I eventually emerged from my labours with a 'B' grade. I suppose the wind must have been blowing very strongly in my direction that day.

Therefore when Graham found instructions for making a model robot in a children's magazine and demanded my assistance I approached the task with interest but understandable reservations. The general idea was very simple: a big box for the body, a medium box for the head and two small boxes for the legs with the whole thing covered in tin foil. I didn't have all the materials, boxes being in short supply, so I tried to make up for it by using a tin for the head and toilet rolls for the legs instead. The results were only partially successful. While the top three quarters of Robot were presentable the bottom quarter sported one leg that was shorter than the other and festooned with vast quantities of selotape that I had used in a desparate bid to hold it in place. Robot leant dangerously to one side and had to be tilted carefully to enable him stand up at all. In short, he was generally lacking the robust qualities normally demanded of children's toys and after initial pleasure Graham soon decided the model wasn't up to scratch. The magazine came complete with eyes, buttons, etc to stick onto the finished creation but these were never added and our drunken-leaning tin-foil friend was left alone in Isaac's room looking like a robotic version of Shakespeare's Old Age: 'Sans teeth, sans eyes, sans taste, sans everything.'

There is a footnote. Not even Supermums with needle in hand can do everything. Here is Graham, rushing around as usual in his superman outfit but discovering abruptly that it has a fatal flaw:
"Daddy!"
"Yep."
"I want to go up in the air like other Supermans! But I can't..."

Ah, yes. The desire for unpowered flight - a mystery that has baffled humanity from antiquity to the present day. Icarus couldn't do it and nor can we. I wonder whether a zip-wire down the hallway would be any good? Need someone else to install it though...