Daddy and the Guilt Germ 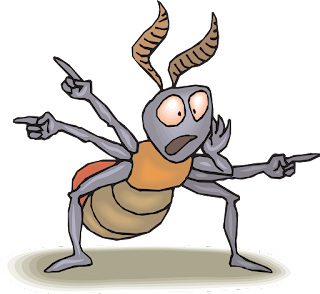 Eight o'clock PM. Both kids are fed and in bed, the lounge is tidy, the washing-up has been done, the dishwasher loaded. In short, the daily to-do list has been pretty much done and I can now contemplate a whole two hours or so of my very own to do whatever I like.
Stress-free relaxation? I'm a full-time father; absolute idleness is not something I'm accustomed to. With endless possibilities for whiling away a pleasant couple of hours all about me I remain in a state of confused limbo, wandering aimlessly from room to room in search of inspiration. Read a book? Nah, don't feel like it. Watch a DVD? Nope. Do one of those little-jobs-you've-been-meaning-to-do-for-weeks/months-but-haven't-got-round-to-yet? You've got to be kidding! I haven't done it because it wasn't interesting. Why waste time on it now?
Well, what then?
I dunno.

And all the time there's a little voice niggling away in the back of my head; a little voice which keeps telling me I should be using this time wisely, usefully; doing something productive like cleaning out the filter on the tumbledryer or giving the kitchen worktop a proper tidy. It's a grating, annoying little voice but a very persistent one.
The voice of Guilt. The Guilt Germ.

The Guilt Germ has never - so far as I know - been properly identified by either scientists or medicinal experts but for those affected the symptoms are long-lasting and tenacious. Generally they are made evident when the sufferer suddenly begins to worry whenever they are undertaking any task, of any kind, that they should be doing something else quite different.
"What are you doing this for?" the Germ enquires. "Don't you think you should be playing with your children - over there - instead?"
"No," the victim replies stoutly. "I must do this."
"Must you?" the Germ replies. "Are you sure? Don't you feel that this is a waste of time? A pointless expense of energy which could be better employed elsewhere?"
"Maybe," the victim mumbles, wavering. "Perhaps you're right."
"Of course I'm right," says the Germ. "After all, you can fold up the washing this evening but your children will be in bed soon and you won't have spent any time with them. Do not waste the golden hours of their childhood so, I beg you! For if you do, you are sure to regret it."
There is a brief inward struggle on the part of the victim and then "OK," he mutters and puts down the pile of crumpled washing to go and play with the children in the next room.

For a while there is peace. The Germ seems to have vanished into the atmosphere and the victim is savagely content in having done what is right. Then, from somewhere behind his left ear, he hears an apologetic little cough.

"Hope you don't mind me mentioning it," says the Germ, materialising suddenly from nowhere, "but I just happened to be passing by and saw what you were doing. It's for you to say of course but I'm not really sure that this is the best use of the few precious moments available to you. I'm sure you could be more usefully engaged. Playing with the children is not really top of your priority list. I noticed a pile of washing in the other room, badly in need of attention. Why don't you go and fold that up neatly first? Then that little job will be finished and you can play childish games with an easy mind."
"That's what I was doing before!" the victim roars.
"It was?" says the Germ, astonished.
"Yes, and you told me to stop that and do this instead!"
There is a moment's silence and when the Germ speaks again it is in a voice laden with reproach and sadness; as though he had been unfairly betrayed by a trusted friend.
"Impossible, I would never advise anyone to do anything other than what is absolutely correct." He pauses thoughtfully. "Having said that, perhaps you could abandon both these activities and do something else instead. Why not spend a little time on your children's education? You can never get enough learning, even at this tender age. I do think you should apply yourself to it without delay. What about some phonics work? A few easy sums? Perhaps you could start them off on the rudiments of Shakespeare's plays? That's it..."


The Germ has other symptoms, most notably the temptation on the part of the sufferer to feel that however hard they have worked they have never done enough. I think of a day a couple of weeks ago when, among other things, I defrosted a freezer, cleaned sinks and toilets, cooked several dinners and lunches, walked back and forth from pre-school with two children, had just over an hour's break from getting up in the morning until going to bed at night and yet retired to rest feeling that I hadn't really accomplished much and should have been able to do more. The Guilt Germ, hard at work.

I don't know whether this is something that stay-at-home Dads are particularly prone to or whether I am an isolated case but this ailment afflicts me for much of the time in one way or another. I suspect that this is because I am habitually quite successful at suppressing the attacks and therefore, while it hasn't been able to overcome me, it hasn't been cured either. I'm like one of those people who won't give in to a common cold and so end up sniffing for weeks, while the person who went straight to bed with a hot water bottle and a packet of Night Nurse is up and about in a couple of days. If the Guilt Germ suggests to me that I should be emptying the dishwasher rather than reading a book I cordially concur with him and begin another chapter. If the Germ whispers to me that I haven't been working very hard and my wife would have been able to do twice as much in half the time I regretfully agree that this is undoubtedly true and carry on staring at the view out of the window. Then around five o'clock I suddenly get an especially bad attack of guiltiness and for a feverish half-hour try to do fifteen different things at once without managing to do any of them properly. I am inclined to think that only Dads are affected in this way. Mums, obviously, are more conscientious and therefore at less risk of infection.

And so we finish with the charming picture of a stay-at-home Dad who has achieved nothing all day but has managed to do half of everything, curled up on the sofa, his eldest boy snuggled up beside him and a book on his lap.
"Now son," he says, "repeat after me: 'When shall we three meet again? In thunder, lightning, or in rain? When the hurly-burly's done, When the battle's lost and -'"
"What's it mean, Daddy?"
"What does what mean?"
"What you just read?"
"Well, it's Act One, Scene One of Shakespeare's famous play, Macbeth. I studied it at school and I thought perhaps you might like to start on it too."
"I don't like it, Daddy."
"Nonsense, son, you'll soon get the hang of it. Now where were we? Ah yes - "
"Can I watch Octonauts instead, please Daddy?"
"Excuse me," says the Germ, appearing unexpectedly as usual. "So sorry to intrude but I just couldn't help overhearing. I do think that the little boy has a point, you know. Shakespeare's Macbeth probably is a bit advanced for a four-year-old and - who knows - it may even have been removed from the syllabus since you were at school."
"Do you really think so?" Daddy asks in the weak and feeble voice of helplessness.
"I do, I do indeed. In fact, I'm not really sure why you're here with the lad at all. There's all sorts of important things to be done that you haven't started yet. Dinner to cook, vegetables to prepare, potatoes to peel, children to feed and all that before Mummy gets home. I wouldn't like her to think that you hadn't done anything today. Would you?"
Posted by Daddy Do-little at 06:20:00