There is a box of biscuits in our kitchen; a rapidly dwindling reminder of a long gone Christmas, perched high on top of a cupboard well out of the reach of childish hands. That was the intention - but Graham had other ideas.
"Mummy, I can't reach the biscuits."
"I should hope not," Mummy thought.
"I got two chairs, but I still couldn't reach them."
"?" Mummy followed him into the kitchen to see what he meant.
Graham has his own small table and two small chairs in the kitchen next to Isaac's high chair. There is also a normal dining-room chair that I sit on when giving Isaac his meals. In an attempt to get to a height from where he would be able to reach the biscuit box Graham had dragged the large chair over to the cupboard, lifted one of his small chairs onto it and climbed up - to no avail; the goodies were still out of reach. Big sigh of relief there...

It's another golden episode in the life of Graham: Mister Independent.

"I can clean my own teeth Daddy."
After looking at the toothpaste liberally spread over the bathroom sink Daddy is forced to disagree.
"Oh, that doesn't matter," Graham says airily.

"I'm still hungry Daddy. I'm just going to look in the cupboard and see what I want."
He reappears with a bag of fruit shapes in his hand - something which I consider to be an inferior but rather more desirable alternative to the real thing.
"Can I have these, please?
"Yes, if you like."
A little later I notice another packet of fruit shapes - empty - on the table.
"Graham, did you have two packets of fruit shapes?"
"Yes, I went and got them out of the cupboard myself."
(Sighs!) 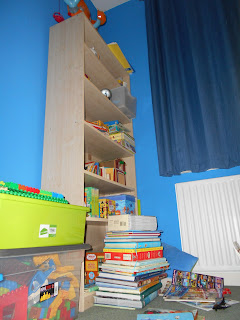 Finally (or should that be most recently).
Mummy and Daddy go into Graham's bedroom. He has a few books on his bed - proper reading books which are far too difficult for him to understand and so have been put on the top shelf of the bookcase in his room ready for him to look at when he is older.
Except that clearly they aren't on the top shelf of the bookcase; they're on his bed.
The bookcase is nearly six feet high; Graham is just over three-and-a-half feet high.
"How did you get these books down Graham?"
"I made a pile of books and stood on it." He indicates a stack of sturdy volumes piled up on the floor. I'm pleased to see that they're mostly good, solid hardbacks; you don't want to rely on flimsy packbacks when you're making a tower.
Good thinking son.

Mummy totters from the room, running through all the various disasters that could have resulted but hadn't. Me? Serious, yes, but there's a little part of me which thinks that really that's not bad going for a four-year-old.

Did I say 'finally' and 'most recently' earlier? If so, who's that who's just climbed up onto the windowsill in his bedroom and is now standing there knocking on the glass and waving to me as I load up the car on the front drive?
Graham! Again!
Get down! Now!
Please.
Posted by Daddy Do-little at 12:09:00