5 Tips for Making Fairy Cakes with a Child 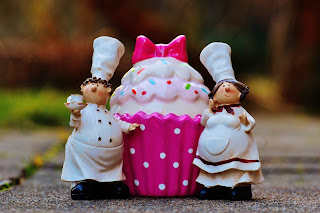 Actually, let's go over that again.

Like many people (except you, dear reader) I have some things that I'm not very good at. I can't do cryptic crossword puzzles, I can't play tennis, I can't do plumbing and when it comes to mending a puncture - well, you'd get more help from the neighbour's cat - if they had one. The above list could be extended more or less indefinitely but, as life is brief, let us merely say that cooking, baking and most types of food preparation would be on there somewhere, probably pretty near the top.

I am well aware that there are people (including you, dear reader) for whom cooking is a treat. People who can't wait to get into the kitchen to try out a new recipe and are never happier than when they have twelve different pots on the boil all at the same time. I take my hat off to them - but I am not among their number. I am one of those unwilling chefs who, when he breaks an egg to make an omelette, spends more time fishing around in the yolk for bits of eggshell than he does over the actual cooking, adds cheese to everything and believes that the guy who invented fish fingers deserves a knighthood. I'd put my proficiency at cooking somewhere on a par with my expertise in electronics - and this is the man who could burn your house down simply by turning on the light switch.

Cooking and cooks have, for me, an exoticity all of their own; the words 'garlic powder', 'olive oil', 'cinnamon', 'sage' and 'thyme' have all the magical qualities of 'abracadabra' or 'open sesame' but I haven't the faintest idea what to do when confonted by them in the kitchen. Only a few weeks ago Gilly found me a simple recipe for making biscuits - in a child's recipe book - and suggested that I could do a bit of baking with Graham. I tried - dearie me, I tried - but the mixture didn't seem to want to work out right and in the end Gilly had to come to the rescue. It was largely due to her that the biscuits finally turned out really quite edible. My share of responsibility was, I feel, minimal at best.

And so it was with a look of the deepest sympathy that Gilly said, Wednesday morning, "I'm afraid that Graham will want you to make fairy cakes with him this afternoon." I agreed, with both statement and facial expression. Ever since Gilly showed Graham the 'ahoy there! pirate fairy cake mix' that she'd bought from Sainsbury's I'd been waiting for the bomb to fall. Now it had.

That afternoon, with Graham standing on a chair at my side and both appropriately aproned I took a squint at the instructions on the packet. It looked like the sort of mix that would allow even a four-year-old to produce quite a tasty treat, except that this four-year-old had me to 'help' him.
Preheat oven, place cake cases into baking tray - Yep, I can handle that.
Empty chocolate sponge mix into a bowl - Oh dear, potential for mess there.
Add 1 medium egg and 4 tbsps cold water - Mega potential for mess!
Whisk on a medium speed for 2 minutes - The mind boggles!!!!!!

[Enough of your life story. What about those tips? Patience, all in good time...]

We set to, Graham having helpfully fetched two spoons. I then fetched two more as I wasn't sure the first two were still sufficiently clean. In went powder, egg and water. Graham demanded that he do the whisking and managed quite successfully until the whisk got too noisy when he was content to watch me with his hands over his ears. It wasn't until we started spooning the mixture into the baking cases that things really got interesting.
I don't know whether you've ever tried spooning sticky, drippy cake mix into small baking cases with a small child to help? It's very involved. First of all the mixture won't go onto the spoon, then it won't come off to go into the case, then it suddenly drops off when you aren't looking and lands on the baking tray instead of the case, then the small child says it's his turn and starts waving a wooden spoon thickly plastered with chocolate cake mix around in the air; some of the mix goes where it should and some doesn't. Eventually some of the cases have enough mixture in but some still haven't got any and there isn't much left in the bowl; the small child is now asking whether he can eat the mixture from the bowl. You give in and begin shifting mixture around the cake cases with a teaspoon so that they are relatively even, while the small child begins to scrape out the remnants of the mix from the bowl; chocolate spreads across his face and drips onto his apron. The cakes themselves are a mess; there are thick streaks of chocolate on the baking tray, dollops of chocolate hanging over the sides of the cases and all the cakes are going to turn out different sizes - if they turn out as anything at all. You sigh, shove the cakes into the oven hoping for the best and then begin to fill the sink with all the numerous utensils that you have used finding, inevitably, that there isn't room for everything.

Actually, the cakes turned out quite well, if rather unusually shaped. Graham sampled one before I even had a chance to do any icing and gave it the seal of approval 'Mmm, yummy' and I managed to get the icing and skull-and-crossbones decoration on without further mishap although the end product looked anything but professional. My feet ached, my back ached and there was enough washing-up to keep me busy for days if we hadn't had a dishwasher but Graham was satisfied and that was, after all, the main thing.

Anyway, I promised you 5 top tips. They are as follows:
1) When making fairy cakes always ensure that you read the distractions careful.
2) Accept that a certain amount of chaos is inevitable.
3) Assume that everything will take twice as long and be twice as messy.
4) Do not expect culinary perfection.
5) Most importantly, when anyone asks who made the cakes tell them that they were created by your child; then notice how their expression of scorn magically changes into one of indulgent approval.

"Did you enjoy making the cakes?" Gilly asked Graham when she came home.
She didn't ask me. I guess she already knew the answer.