You know what? So what? 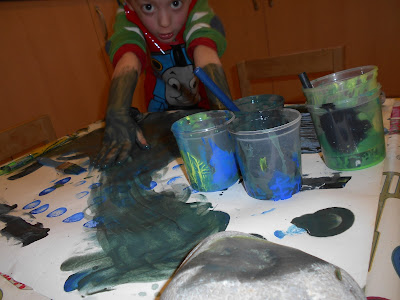 Friday afternoon. Half term is drawing towards its end and so far Yours Truly has just about managed to keep his head above water. It hasn't been easy. A heavy cold turned at least a couple of days into a phlegm-laden struggle, compounded by the fact that the boys were both recovering rather slowly from colds of their own. Evenings ended early in a weary flop into bed and mornings sometimes started too early as Isaac woke up feeling chilly and felt that his parents should know about it.

Even so, the week has not been without entertainment and interest. A carefully-planned trip to Ashford livestock market on Tuesday was, admittedly, an almost complete failure. I prepared meticulously, packed intelligently and worked out to the last item just how I was going to transport two small boys - one of them practically non-walking - around a busy market in safety and comfort.

Everything went like clockwork until we entered the main arena. Then, as we came out onto the high-level walkway that runs above the animal pens, I remembered about the noise. A veritable cacophany, harsh and discordant, surged up at us from below. Metal gates crashed, cattle bellowed, men shouted. Graham didn't care - he'd seen it all before - but it was too much for Isaac. A whimper turned into a sob which then rapidly grew into a howl. I hurried along to where the calves are sold, hoping to soothe his nerves - nice quiet animals, calves. Sweet, too. The door to the ring was open. From inside, the animated tones of the auctioneer hurtled out at us, and Isaac cried anew, a piercing wail which threatened to drown out even the raised voice of the auctioneer within. Three minutes later we were out of the market and heading back to the car, our brief tour abruptly abbreviated.

A visit to the Rare Breeds Centre at Woodchurch a couple of days later proved more successful. The animals were quiet there and people didn't shout much. Cows chewed hay in (near) silence and gates remained peacefully closed. The only animals on the loose were a few rabbits, a chicken, a goat and a guinea-pig and Isaac rather liked those. Even when a turkey gobbled at him he merely regarded it with interest. A* for the Rare Breeds then.

It was Gilly who suggested that Graham should do a bit of painting on Friday afternoon. The thought would not have occurred to me, art not being my strongest suit, but Graham enjoys it. Accordingly, I unearthed paint and brushes, slipped Graham's protective overall on, found a piece of paper to put on his little table in the kitchen, securely weighted down with four large stones and left him to it while I got down to feeding Isaac his tea and clearing up.

Initial results were blandly encouraging. Graham obediently spread paint over the paper, explaining that he was drawing a fish and a boat. I squinted dutifully at the fish and said mildly that it looked more like a turtle. It was not, Graham insisted, a turtle; it was a fish and he sternly pointed out the creature's tail in justification.
Then he lost interest in the paper and began to paint one of the stones instead. It was the first departure from the original plan of operations, a small deviation that proved to be the precursor to more extravangant digressions later. The stone went through several colour schemes and eventually ended up a rather gloomy black. Graham thought it looked smart; I didn't but my criticisms fell on deaf ears so I sighed and carried on unloading the dishwasher.

Then Graham found the water pot. I'd left it next to him to clean his brushes in but Graham, like a true artist, had a greater vision. It wasn't long before the water was being freely mixed in with the paint on the paper, from the paper it descended onto the kitchen floor where some of it found its way onto Graham's foot. Grey paint marks were smeared across his skin, drops of bright green formed a puddle on the lino. I protested vigorously, scrabbling around on hands and knees with a bit of kitchen towel to soak up the mess. Water, I explained, was meant for washing brushes, not as an alternative method of producing watercolours. Again, I was ignored. Graham began tipping water from the water pot into the paint pots and then mixing them all into one; green, blue, yellow and black sloshed unceremoniously together to form a single watery mess the colour of dirty old oil. I was still unloading the dishwasher and left my complaints hanging in the air behind me as I passed from cupboard to drawer to dishwasher and back again. Unsurprisingly, they had no affect. The next time I came in from the utility, laden down with clean cutlery, Graham held up two paint-smeared hands for my inspection.
"Look Daddy. See how black my hands are!"

It was at this point that the dull, dutiful, responsible Father within me suddenly turned around and fled. Something snapped. A feeling of recklessness flashed over me, rash and uncontrolled. Somewhere something said, "You know what? So what?"
"Grey, I call it," I said. "You need to put more paint on."
Obediently, probably slightly surprised, Graham slapped more paint onto his palms and held them up again for me to see.
"Still grey. You need more paint. Go on!"

The mist descended. A soggy mess of paint and water spread itself over the paper. It daubed itself over Graham's hands and flung itself onto his overall. Graham, in an astounded ecstacy of joy, was smearing black slush over his wrists. The dismal tide reached upwards, slapped liberally over his lower arms nearly to the elbows; he was rubbing his hands over the paper, black deposits trickling between his fingers and spreading themselves generously over his face. Fish, boats, all of his original artwork vanished, swallowed up in a  grotty wave of black.
"Go on," I cried, "Hold your hands up! Let me see!"
Graham continued to run his hands over the paper. "I'm having fun," he said, speaking in the astonished tones of one who still can't quite believe that this is really happening and went to wash his arms in the toilet sink where paint dripped over the taps and soap bottle and spread themselves in dirty stains over the clean white basin. Then he hurried back to start the whole business all over again.

By the time Gilly finished work and we had to bring proceedings to an end, Graham had been 'painting' in the broadest sense for nigh on two hours. The floor, sink, table, stones, Graham's clothes and Graham himself all bore testimony to his efforts. Gilly inspected the confusion with rueful amusement and busied herself with a camera.
"It's okay to do it once," she said warningly, "but don't let him think he can do this every time."

She led Graham away for a final wash-down, the painted paper - it could hardly be called a picture - went into the bin and the house returned to normal.
The white lino floor with its ugly black smudges was beneath our feet, the painted stones were washed off.
"Don't let him think he can do this every time."
Er, no dear. 'Course not.
Posted by Daddy Do-little at 13:33:00