Cycling With Children, Part I: The Concept 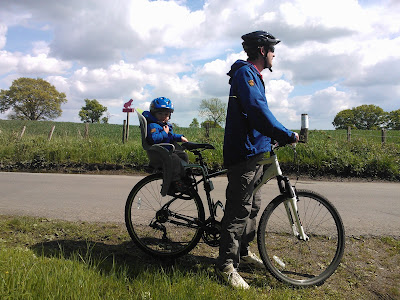 Occasionally, when visiting our relations in England's South West, I accompany my brother-in-law on an afternoon cycle ride. Perhaps 'accompany' is too strong a word; let us just say that we follow the same route. There are parts of the UK that are quite flat - Cambridgeshire, for example - but the area that we cycle is not one of them. Sometimes it seems to me as though the countryside is formed exclusively of V-shaped valleys - no sooner have you gone down one hill than it is time to go back up another. And they aren't small hills either; they're the sort of hills that have lots of mischievous bends in the road and alluring false summits that trick you into thinking you're almost there...except that when you reach the top you find that it wasn't the top after all, if you know what I mean.

Now this doesn't pose much of a problem for my relation-by-marriage (who for the purposes of this blog I shall rename Levi). He will pedal cheerily up the hill, leap off his bike at the top and settle down to munch a banana and take in the scenery. All is quiet: perhaps a cow will peer at him curiously over a farm gate and maybe a pair of buzzards will soar majestically on the air currents; all is serenity and peace. Then, above the muted whisper of the wind, Levi hears the sound of laboured breathing and the Head of the Dolittles wobbles unsteadily into view. His chest is heaving, his face is contorted and beads of blubbery sweat bedew his furrowed brow, beneath which two glassy eyes glare with desperate longing at the summit far, far ahead. His knees are trembling and he is moving at a speed which would have prompted the Tortoise, had he observed it, to have turned to the Hare and demand accusingly, "You see that? And you called me slow." Eventually he crests the rise and collapses puppet-like to the ground. "Nice view," he croaks, with a woeful attempt at nonchalance, trying to pretend that the sluggishness of his ascent was due entirely to the fact that he was pausing to admire the surrounding countryside. Inside, his lunch is feeling uncomfortable, as though it wanted to come up for air and he lies completely still in the hope that it will decide to stay put. When Levi offers him a cereal bar he shudders with repugnance and turns his face away.

Levi picks his bike up and vaults into the saddle. "Better be moving on," he says. He looks aside politely so that he doesn't see the expression of dumb misery that has come into his companion's face.

Now try to imagine that you are cycling up that same hill with an extra three stone of wriggling infant suspended above your rear wheel. Speaking for myself, I don't want to imagine it and yet I predict that I will be spending several days this Spring and Summer doing something very similar. Why? Well, put simply:

Indeed the time has come when children and adults alike begin to recognise that there is a world of warmth and colour beyond the confines of the home; a land just waiting to be explored and for some of us that includes exploration on two wheels as well as two legs.With small children this normally involves attaching a child seat(s) or trailer to your bicycle, depositing one or two children into it and then surging forth onto the open road, the gentle breeze on your face, the soothing hum of the tyres in your ears, the green and pleasant land rushing by on either side. Of course, it's a double-edged sword this one. There are problems: the extra weight and extra toilet breaks, the cost and the simple gut-wrenching effort but, in compensation, the benefits are many: freedom, good health, no parking fees, etecetera. And then there are the other questions. Will the kids enjoy it? How much extra stuff will I need to take? Will I look ridiculous in cycling shorts?

Over the next couple of weeks I hope to look into a few of the common problems and benefits associated with cycling with a child strapped to your bike. Personally, speaking as someone who is neither particularly fit nor particularly good at cycling, I have found that the advantages more than make up for the tribulations and I am willing to accept the latter in order to embrace the former. For those of you who have never considered the concept this is the time to do it, before the summer heat really kicks in and when the world feels fresh and new and vibrant. The kids will love it, you can luxuriate in travelling light and the joy of the open road will be yours.

And, no, cycling shorts are not a requirement.
Posted by Daddy Do-little at 02:22:00