Now, Dudley Ambrosius Dolittle was a sahd man - that is to say, his wife went out to work while 'Dad' stayed at home with the children and did nothing. This was something that he rather liked because doing nothing was something that Dudley Ambrosius Dolittle was very good at. Therefore, as well as being a sahd man 'Dad' was also a very happy one. He rose at variable times each morning - normally as late as possible - indulged in a leisurely breakfast (after his children had partaken of a less leisurely breakfast and the eldest had been abandoned at a pre-school) and meandered through the day in a way that guaranteed he completed all the jobs that didn't need doing and conveniently forgot all the unpleasant tasks that did. There are very few people in the earth who are as able as Dudley Ambrosius Dolittle to simply sit staring out of a window watching a motionless world pass by. It is a talent that very few possess.

You would have thought that his sons would have inherited this skill but they had, thus far, proved sadly deficient. Where 'Dad' was slow, they were dynamic, where 'Dad' was content to let things be as they will be the boys were ever bent upon active investigation and when 'Dad' settled down for a cosy nap they insisted upon coming up and begging him to read them a story. It was a hard life for a sensitive man but Dudley Ambrosius Dolittle bore it as well as he could. Sometimes he even exerted himself to great feats of hard labour and activity. Only today, for example, he had extracted the vacuum from underneath the stairs and vacuumed up several children's toys and a pair of socks. (It all saved tidying up later.) Then, mindful of the expected arrival of his wife home from work, he had exterted himself to no small degree and tidied the kitchen; superficially at least. One small child, who had been extracting the contents of a kitchen cupboard, had been banished to his cot and 'Dad' cleverly found a pretext to send the other child straight to bed without reading him a bedtime story (reading bedtime stories is so tiring). Now, in the sudden peace that this twin dismissal had afforded him, Dudley Ambrosius Dolittle decided to have a well-earned rest.

We read that once, many years ago, a young princess pricked her finger on a spindle and went to sleep. Dudley Ambrosius Dolittle needed no such doubtful props. Having won through to the sofa in the lounge he sank gracefully down upon it and leant back against the cushions. The electric light disturbed his eyes so he groped around for something to drape across his head and found a milk-spattered muslin. Thankfully, he pulled it over his jaded brow. His eyelids drooped, his breathing became regular and deep. He slumbered, he slept; fatigued and weary man, a picture of distinguished elegance and endurance. 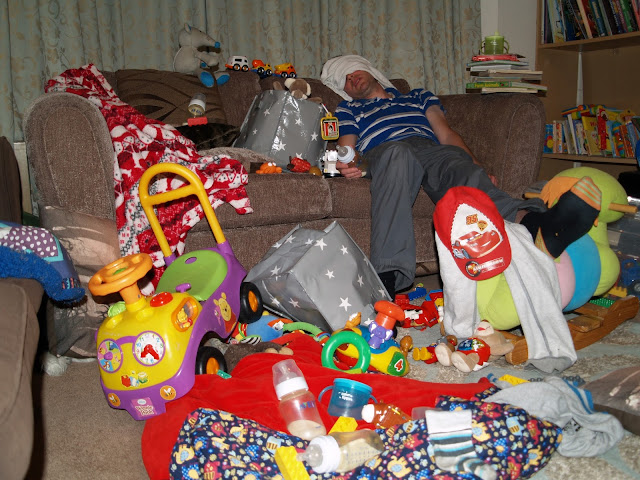 Email ThisBlogThis!Share to TwitterShare to FacebookShare to Pinterest
Labels: It's a Dad's Life