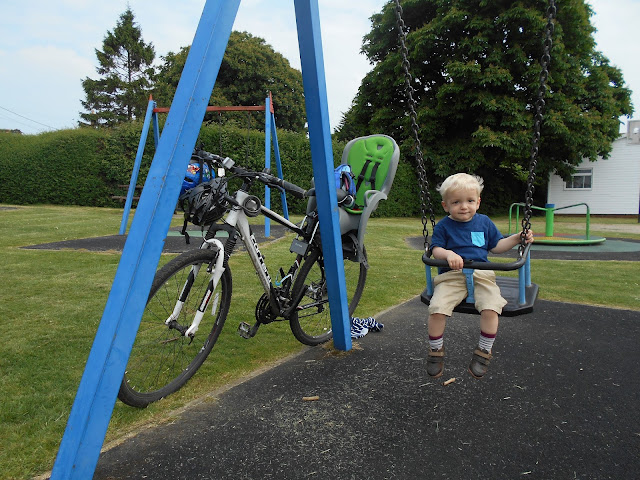 So, welcome to the final installment in my unsolicited how-to guide for cycling with children. (Aww look, when was blogging ever solicited?) We've done the intro stuff, we've done the how stuff and we've done the problem stuff; so what about the good stuff? What can a bike provide that a car can't and why would you surrender your sofa for a saddle? I hope this gives you a few answers.

Borne Free
Now, let's get this clear straight off; cycling with the kids is rarely, if ever, free. There is the cost of the bike, the child seat or trailer and all the essential extras such as helmets, bike pumps and something to carry your lunch in. And that doesn't take into account the other necessities that may not be required on the ride but are still likely to be needed at some stage for the care of your equipment. Puncture repair kits, brake pads and oil would all fall into this category. Those who want to travel away from home will also need a bike rack for the car - more cash. Suddenly the whole experience begins to look pretty expensive. The only alternative is to hire a bike and seat/trailer for the day. This isn't free either but it does mean that you don't have to buy all the equipment yourself and so for occasional cyclists may be a better option.

Yet for those parents who want to go cycling on a regular basis the good news is that spending out a bit, particularly if you can get a lot of it second-hand, may not be the money-down-the-drain that it first appears. In fact, like the set of saucepans that Uncle Claude gave to Auntie Matilda last Christmas, it is a gift that keeps on giving. Regular use provides one with the not entirely inaccurate illusion of near penny-pinching miserliness. When you consider that most children's activities and venues will involve a charge of some sort and bikes can park for free in any town centre anywhere then heading out for a cycle ride instead suddenly seems a lot more cost-effective. It's a bit like comparing Auntie Matilda's saucepans to a microwave ready-meal; pricy to start with but much cheaper in the long run.

Except that cycling is more fun than any saucepan - way more fun.

The Broad Horizon
Cycling holds the mid-ground between walking and driving: slow and quiet enough to take in the world around you but mobile enough to go a reasonable distance in a reasonable time. It's true for adults and it's true for kids as well. Cars for children, particularly young children, are generally a place to see unknown sites whizz past, gone as soon as seen, and to go to sleep. Walking may not get you so far but allows children to take a close interest in everything around them: flowers, plants, chickens, snails, bugs and whatever else attracts their infant fancy. You can't go so far or fast on a bike as in a car but the opportunity to stop at a hole in the hedge to look at a herd of cows or run down silently on an unsuspecting pheasant at the side of the road more than makes up for it. In comparison it gets you a whole lot further than going for a walk and hopefully allows you and your child to see a greater variety of fascinating sites and scenes. What could be better than wheeling cheerfully out of your front gate one fine morning, wending your way through a few picturesque country lanes - pointing out objects of interest to your little passenger on the way - and ending up at a small village shop with two ice creams an hour later, pleasantly energised and munching the ice cream with the contented feeling of one who has earned it? Idyllic, yet possible.

When You make some time for You
Parenthood is a busy life but it's not one that's guaranteed to burn many carbs or raise the pulse. Plod to the laundy basket. Plod. Plod to the washing line. Plod. Plod to the shops. Plod. Sprint to school. Sprint. Er, actually that last one doesn't fit in. (Incidentally, have you ever wondered why the policeman in Noddy is called Mr Plod? Was Enid Blyton trying to make a subliminal derogatory statement about her local constabulary? Discuss.)
On the other hand, being in charge of a child provides us with the perfect opportunity to have the sort of fun we haven't had since Primary school. Things like going in the ball pool at the soft play area and playing on the swings in the park ("Yes, Officer, I know the sign says 'Under Twelves Only' but I'm here with my child..."). Please don't try to pretend you've never done those things.
Cycling is like going in the ball pool. It allows both you and your child to enjoy yourselves at the same time. It also ticks the box for stress-free child entertainment for at least one hour. There is no way your kid is going to run away/steal another child's toys/draw on the walls/etc. etc. when they're securely strapped into a bike seat. Result!
Cycling is also like swimming: the more you do, the more you can do. Even someone as unfit as me. There are hills I pedal up quite easily now that four years ago would have been giving me nightmares; all because I ditched the non-cycling habit of a lifetime and 'got out there'. I didn't get selected for Rio 2016 and I'm not going to Tokyo 2020 but I may one day pedal to the top of a hill without having to resort to the first of my 21 gears. 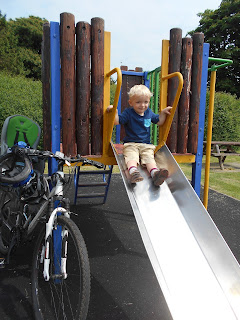 I'll finish by telling you a little story. This morning, Isaac and I went for a bike ride. Isaac has a cold and spent most of the morning unhappy and with a runny nose but he cheered up when I got his shoes on and opened the back door. Stopping to pick up my keys I came outside to find Isaac already trying to climb up onto the bike via the front wheel.When he saw me he picked up my helmet and handed it to me saying something in baby-talk like 'Quick Daddy, shove this on and let's go'.
Off we went through the quiet country lanes, through woods heavy with early summer leaves, past a group of sheep shearers and meadows brimming with red sorrel and buttercups until we came to a village a few miles away with a small play park and an enormous village green. Isaac spent about half and hour playing on the swings and slide and wandering happily and safely around the broad green expanse. When it was time to go he allowed himself to be put back into the bike seat without any fuss. He smiled when I put his helmet on, he smiled when I put my helmet on and he sat in silence as we swooped through the countryside on our way home. And I didn't have to wipe his nose once!
This is the boy who I was afraid would find cycling a bit scary, the boy who cried in vexation the last time I took him to the park because he was having fun and didn't want to leave. That's a testament to just how enjoyable cycling with kids can be. Not only is the destination part of the fun, the journey is too. Enjoy the journey!
Posted by Daddy Do-little at 10:59:00