Meltdown at the Swimming Pool 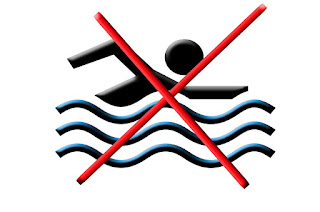 On Friday I experienced one of the more difficult predicaments of my four-and-a-half year fatherhood. Like most major mishaps it was also completely unexpected.

I took my eldest son swimming. He has regular lessons at the local pool every Friday afternoon but his usual teacher was on holiday and we were expecting one of the other teachers to take his class. No problem; Graham knows both the other teachers and was looking forward to seeing whichever one of them it was. (Whether they were also looking forward to seeing him I wasn't sure but I hoped for the best.) We arrived at the pool on time, got Graham changed and went to stand by the side of the pool to wait until the previous lessons had finished.

I looked around. One of the swimming teachers was on the other side of the pool with her normal class but I couldn't see the other lady who has filled in for Graham's teacher previously when she has been away. There was, however, another teacher there who I hadn't seen before; a tall young man busily instructing four wee kiddies in the shallows. Lesson over, he gave them a cheery thumbs up and led them carefully to the pool-side showers to have a quick wash before shepherding them back to their waiting parents.

Graham eyed him dubiously. "I hope I don't have that man, Daddy."
Why not? He looked nice enough to me.

The children from the classes that had just finished trickled away, dripping, shivering and wrapped in towels and the new classes moved forward, parents waiting patiently for their children to be claimed and whisked away. The other lady teacher had not appeared and the young male teacher was inspecting a register. He called out Graham's name; I pushed the boy forward encouragingly and he disappeared slowly into the crowd.

A few moments later he was back, forcing his way through the melee of adult legs and infant children to fling himself against me and wrap his arms around my legs, head buried in my knees.
"What's up, Graham?" I asked in surprise, not prepared for this sudden eruption of childish affection.
Confused mumblings came from Graham's bowed head. I crouched down and tried to disengage him, tried to make sense of what he was telling me.
"Don't want to go swimming...Don't want that man..."
"But it's fine, don't worry..."
He clung ever tighter, face pushed against my chest, his cheeks red.
"I want to go home, Daddy..."
"Don't be silly, it's fine!"
"I just want to go home, Daddy...I don't want that man teaching me..."
"But you haven't even tried yet! Come on, I'm sure he's really nice," I coaxed, hauling Graham onto my knee. A foaming globule of snot splashed onto my jumper. I tried to wipe it away with a hanky. Graham raised his head and a watery trail followed his nose across my collar. "Look, the other children are going in. It's fine, really..."
This wasn't strictly true. Only one small girl had ventured into the pool with the new teacher, who was now standing looking over to me questioningly. I made a vague gesture of reassurance, 'Everything will be fine, just give me time' and turned back to my weeping son. Another small boy from the same class, voice stridently upraised, was protesting vigorously nearby. His father was having just as much trouble as me although he'd kicked off his shoes and rolled up his trousers so that he could accompany the lad a little way into the pool if need be. This attempt at pacification had no effect and I watched as father and son disappeared in the direction of the changing rooms.

I wasn't quite ready to give up yet. I continued mumbling reassurances, encouragements, threats, whatever I thought might work. Nothing did.
"I just want to go home, Daddy."
"Come on!"
"Daddy can we just go home!"
I gave up. I collected the changing bag and led Graham, sniffing, to the changing room.
"Can I have a tissue, Daddy?"
I don't carry tissues. I handed him my hanky. He blew his nose on it loudly, one of those good, satisfying blows with a lot behind it. He offered me the hanky back. I said he could keep it.

The question now was what to do next. I didn't know whether to follow my baser instincts and be angry or to try and overcome this natural response and give the little boy a hug. My wife had the same difficulty when we returned home and I told her what had happened. On the one hand Graham had caused a definite disruption at the swimming pool, absolutely refused to do what he was asked, wasted money by not participating in a lesson that we had paid for and probably made a perfectly nice swimming teacher feel extrememly uncomfortable. On the other hand he had undoubtedly been scared and very upset which is not an unnatural reaction for a four-year-old when faced with a previously unknown situation. In the end we sat Graham down for a talk and tried to be both stern and comforting. Only time will tell whether this has worked or not.

The root of the problem - the teacher - is less simple to resolve. Graham protested that he didn't want to have the lesson because he didn't know the teacher. This may be part of the issue but Graham has had new teachers before and not worried at all. However, all of these new teachers have had one thing in common: they were all female. I believe that if the new teacher had been a lady Graham would not have reacted as he did. It is commonly known that there are very few men involved in the teaching of very young children. Generally, it is women who are involved in the care and teaching of babies, toddlers and infants; men are more commonly seen once the children reach the ages of seven or eight and older. In primary schools they are almost always in the minority, staff-wise. In nurseries and pre-schools I imagine they are about as common as the moon at midday. Graham has never been taught by a man, all the staff at his pre-school are ladies and he has only met men in out-of-school environments, when he has been perfectly happy to chatter with them until the proverbial cows come home. This was different. In Graham's eyes this was a man who had stepped into a sphere previously reserved entirely for women and he did not like the thought of that one little bit. As parents, it is our duty to do what we can to change this view but I do wonder whether only age and experience will bring a true resolution.

I hope that little girl enjoyed her swimming lesson, by the way. She was, after all, the only one brave enough to try.
Posted by Daddy Do-little at 09:48:00