Brylcreem or Sudocrem? The Boy's Choice

Just One of Those Days

It had been a difficult day.

A trip to the park, which ended before Isaac was ready to go home, finished with Gilly having to carry a screaming, kicking two-year-old up the main road, watched with interest by the queue of cars waiting at the temporary traffic lights outside our house. This was the same queue (but different vehicles) that had caused Gilly problems earlier in the day when she had returned home in the car. She had found our driveway blocked by a bin lorry and as she waited for him to edge forward to let her in an enraged motorist behind her pulled up alongside and hurled abuse at her through his window, with accompanying hand gestures. Not the sort of behaviour guaranteed to put you in a sunny mood, particularly when your youngest son follows it up with a tantrum of his own.

But Isaac wasn't finished yet. I was reading Graham his bedtime story when I heard a cry for help ring out from the bathroom where Gilly was giving Isaac his bath. The pair of us scampered along the landing to find a scene of saturated chaos. Isaac, accidentally one hopes, had succeeded in tipping an entire jug of water over the side of the bath. Some had gone on the floor, some on the mat and a fair portion of the remainder had gone over Mummy. From the waist downwards she was fundamentally waterlogged.

I helped, of course but in leaning across the bath to pull out the plug I somehow managed to wrench a muscle in my left arm. The arm went into a (brief) spasm and I hurried heroically away, moaning quietly, leaving Gilly to squelch around as best she could.

Despite these problems we were still managing to get the children ready for bed in record time. It wasn't even 6.40pm and I had already finished Graham's bedtime story, Isaac was bathed and in his pyjamas and we had a decent chance of getting both boys tucked up before 7 o'clock - a very rare achievement for us. So as Graham and I trotted back to the bathroom to clean his teeth I feel I can be forgiven a small glow of satisfaction. It had been a trying day but it was ending well.

As I neared the bathroom door I was surprised to see that the light in Isaac's room was still switched on. I thought that Gilly had already got him into bed and I glanced curiously in at the open door to see what was happening. And there I halted in my tracks, horrified, eyes bulging.

Gilly had been tapping away at the laptop in our bedroom but she stopped straight away when she heard the agonised cry and came running. She looked into the bedroom, gasped and then reeled away, shrieking, her hand clasped over her mouth.

It took me a few seconds to realise that she was actually...laughing.

Sitting on the battered changing mat in the middle of his bedroom floor was Isaac. On the floor beside him was a pot of Sudocrem, extra-large size, which we always leave in a little basket in his room in case we need it. We'd had the pot a while and it had been getting low; now it was nearly empty.

A few years ago Graham had found a pot of Sudocrem left unattended in his bedroom and painted his face with it. Worried about possible ingestion we'd phoned up the Doctor's to make sure that Sudocrem wasn't poisonous. The reply we got was that Sudocrem tasted so bad that he was unlikely to have eaten it anyway and we went away comforted. We
thought at the time that Graham was very naughty and we vowed to keep Sudocrem well out of his reach from that time forward. We know now that we hadn't seen anything. 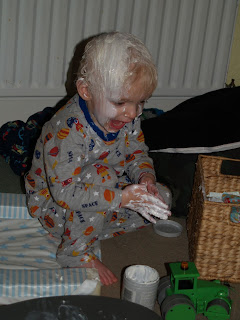 Because what Isaac was doing made Graham's face-painting look preposterously mild; tame, even. Not content with slapping Sudocrem on his face Isaac had also plastered it in his hair. His whole head appeared to be coated a creamy white. Flashes of white adorned his lips and trickled down onto his pyjamas. Blonde locks, dyed prematurely a snowy white, stuck out over his right ear. His hands were caked in white, for he had scooped up great handfuls of the stuff and smeared it over his cheeks and under his chin. He laughed happily through a gooey white mask, blinking painfully when he rubbed his fist into his eyes. It looked as though he'd walked under a ladder and a tin of whitewash had fallen on his head - or like Lady Gaga having a bad hair day.

"And he's only just had a bath!" I said, disbelievingly. 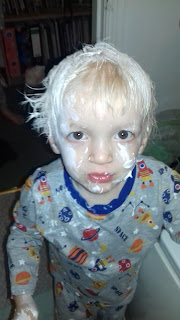 He may have been fresh out of the bath but there was obviously only one thing to do and, rejoicing openly, it wasn't long before Isaac was back in the tub and watching the water rising around him. At least, he was trying to watch in the intervals of having his head vigorously scrubbed by his Mummy. The result was disappointing. Gilly poured soap, water and a fair amount of effort over her son's sticky scalp but the Sudocrem had been well rubbed in. The bathwater turned milky, so much so that we had to drain it away and put in a fresh supply, but Isaac's hair remained persistently matted. Whatever failings Sudocrem may have as hair gel it sure is wonderfully adhesive. The manufacturers would be proud of the way it resisted stubbornly everything that could be thrown at it.

Eventually, we were forced to admit defeat. Isaac's hair still had the appearance of overcooked spaghetti but we put him to bed in the hope that Time and Sleep, those two great healers - as well as the absorbent qualities of his pillowcase - would succeed in completing the job we had begun. They did - although it took several days before Isaac's hair was back to its light and airy self.

And the Answer Is...

You never stop learning. As I finally collapsed into bed that night - having got the children to sleep considerably later than planned or expected - there would have been several lessons that I could have drawn from that day's experiences.
First, that children are unpredictable. Isaac had never displayed the slightest interest in Sudocrem before then suddenly he uses it to turn himself into a living work of art.
Second, that however smoothly things appear to be going, I should never take it for granted that my family will get to bed early, or even on time.
Third, that the most remarkable things can be funny.
Fourth, that we all grow as parents. When Graham plastered his face in Sudocrem we were horrified and rang up the doctor for reassurance. When Isaac went a step further we simply shrugged our shoulders and got on with clearing the mess up.

As it was I probably drifted off to sleep with only one thing firmly set in my mind. Namely, that I am never again going to let Isaac near a pot of Sudocrem, Brylcreem, suncream or any other sort of cream until I am confident that he can be trusted to use it responsibly.