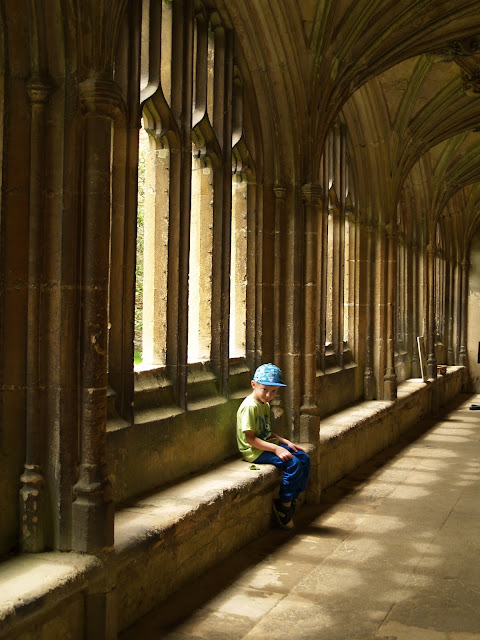 When you think of the National Trust you probably think of retired people: snowy-haired old ladies, map in hand, glasses perched on their noses or hanging from a black cord around their necks, remarking to their friends in clear, cultured tones, "Would you look at the rhododendrons, Doreen! Do you know, I believe they're even better than last year!" before heading off to the restaurant for a cup of tea for two and a slice of coffee and walnut sponge.

You think of landscaped gardens and manicured lawns, ornate stately houses and quiet woodland paths, statues and expensive antiques, softly carpeted drawing rooms, four-poster beds and the decent hush of an educated populace admiring a unique portrait of the First Lord of the Admiralty circa 1867.

Which is an oversight, because the National Trust is actually very good for children. Over the past few years we have found out, to our great satisfaction, that among the priceless antiques and creaky oak galleries there is also a place for clumsy and clamorous kids. Many National Trust properties boast extensive grounds for little ones to wear themselves out in, roaming in relative safety provided you keep an eye on them near the ornamental fountain. The National Trust don't mind if children scout among the shrubs or clamber about the mossy boles of the great oaks and they don't seem to worry about children rolling down any conveniently sloping grass banks or trying to make friends with the resident ducks. And while these might be seen as passive encouragements there are other ways in which the Trust actively attempt to help children enjoy themselves. On a visit to Montacute House in Somerset a couple of years ago we were delighted to find that the cafe had a large box of children books, which kept Graham entertained all through dinner and gave us parents a bit of (partial) peace and in each room there was a picture of an object for the children to find - a small statuette or a picture on a plate - which meant that a day out we had been slightly concerned about all went very smoothly.

With that in mind, here is a picture of Graham at Lacock Abbey, Wiltshire. It has weathered statues, many very breakable antiques, toys in the nursery that Isaac wanted to play with and lots of retired people wandering around admiring the trees. And it also has ten little white mice hidden around the house for the children to find. Graham, thundering up the staircases, charging into the dining room, whizzing through the master's bedroom and hurtling around the Great Hall managed to find them all. He was very excited and we nearly lost him several times - but he didn't break a thing...
Posted by Daddy Do-little at 14:50:00