Caravanning With Kids: A Convert Speaks 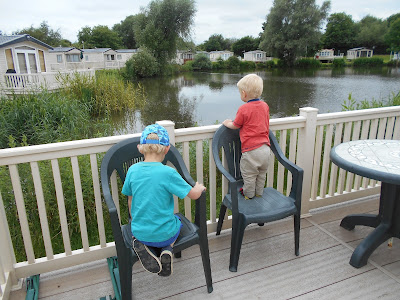 On the 23rd of June 2016 the United Kingdom voted, by 52% to 48%, to leave the European Union in a national referendum. It was, depending upon your point of view, one of the most shattering, joyful, mind-numbing or exciting times in the UK's recent history. It was also unexpected. It seemed that very few people had thought the result would go in favour of 'leave' and the announcement early on the morning of June 24 left voters from both sides of the divide more than a little dazed.

I will remember those two days for another reason. I spent them on holiday in a static caravan in the Cotswolds. That was pretty unexpected too.

Call me a snob if you like but I had always rather looked down on caravan parks. All those rows and rows of motionless, rickety white boxes, butting in on each other and stealing each other's space. All those people, all that noise. I'd been camping before, but that seemed different. There was something macho about camping, braving the elements, crouched over a guttering stove in a tent porch while the rain lashed down outside. Caravanning seemed like a cheat's get-out in comparison - an attempt to live the free and simple life while still retaining many of the (reduced) comforts of home. I considered that most caravan parks suffered from a Butlins hangover; out-dated garishness splashed inadequately over a tawdry soul. Scratch away the fake wood veneer and you risked exposing the tat beneath. How ghastly! Not for me, old boy! Dear me, no!

Even so, I could not resist a strange feeling of excitement building up inside me as the holiday approached. I was going to be sharing a small box with two small boys for four short nights - a prospect guaranteed to set my nerves jangling at the thought of all the chaos and exuberance compressed inside those unstable walls - and yet I was actually looking forward to it. Were my lofty standards slipping? Was I about to step off the pedestal, slap my fellow caravanners on the back and implore them to call me 'mate'? 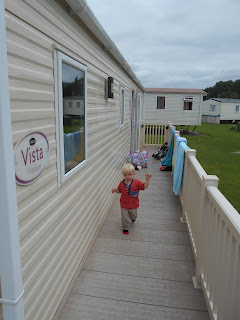 Well, not quite, but my views underwent an abrupt change nonetheless, for - behold - the caravan was a delight! So compact, so well-designed! True, most things creaked slightly if you leant against them but there was everything you could possibly want: sink, cupboards, cooker and hobs, plenty of sofa space, a table, two toilets, a shower and three snug little bedrooms. There was even, oh height of joys! a veranda running down one side of the caravan and broadening out into a spacious seating area with table and chairs at the front, complete with a gate to stop small children from escaping. Isaac immediately annexed this as his own particular exercise ground. Graham bagged one of the deckchairs instead. The caravan looked out over a peaceful little lake, fringed with rushes. Fishermen sat silently at its edge, ducks floated serenely on its surface, terns swooped through the air and the only sound was the cheep of a family of coots as they scuttled about in the reeds just below us. It was serene, enchanting, bliss. Far from being brash and rowdy I struggle to recall anywhere more abundantly tranquil. The only jarring note was the look on the face of one fisherman as he watched our arrival, listened to the energetic thunder of the boys' feet on the plastic decking of the veranda and hastily moved himself and his gear to somewhere a bit more peaceful. It was we who were the noisy ones, not our neighbours.

And then there was the caravan site. The staff were helpful, polite and efficient. They even found us an extra chair, free of charge, to strap Isaac's travel high-chair onto and delivered it to our caravan. The facilities were well-tailored towards families. There was an indoor swimming pool (including large shallow end and a big slide), small soft-play area and a fair-sized outside playground besides other attractions such as mini-golf, an outdoor pool, a restaurant and cafe. Suddenly, spending entire days just hanging around the park didn't seem such a bad option. We relaxed into leisure; went to the swimming pool, played on the playground, dined in the cafe.  The weather, during a June which had rain down as essential and sun as an optional extra, actually brightened up and instead of counting down the minutes until we could be away somewhere a little more classy, I was beginning to wonder whether we should have stayed for a week instead of four nights. 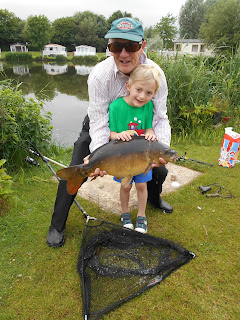 We opened the caravan door and let the kids roam free on the veranda and one evening a friendly fisherman called up to ask whether the boys would like to see the fish he had just caught. It was a big carp, which he returned to the water after both lads had admired and stroked it. There weren't many fish, he told me, so I gathered that catching one was quite an event but even so he happily stayed outside fishing serenely from dawn 'til the moon rose, five days a week, all year round, with a quick swim in the pool and breakfast in the cafe every morning. I watched him for a while, casting his line and chatting as the dusk settled over the water until it was time for me to go back and put the kids to bed. The kids weren't in bed very early those days but going on the playground swings when it's nearly 8pm doesn't seem so problematic when it's the holidays and all your little world is soothing and at peace.

A year ago, if you had told me that Britain would leave the EU I would not have believed you. A year ago, if you had told me I would spend four nights at a caravan park and end up wanting more I don't think I would have believed you either. But that's the surprises life throws at you. My little discovery is as nothing in comparison to the upheaval of the EU referendum but on a personal level it may end up being nearly as significant. I'm not ditching the tent just yet but, even so, I feel that caravan holidays are on the Do-little do-list and there to stay. And you can call me 'mate'.

We stayed:
At Hoburne Cotswold near Cirencester (https://www.hoburne.com/holiday-parks/cotswold/cotswold/).
And there is no way I'm telling you the number of our caravan...we've bagged it for good now! 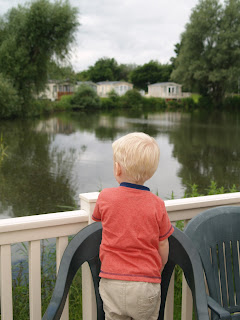