That Long Summer - How to Fill the Children's Holidays 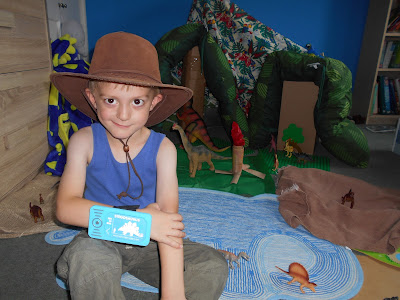 The summer holiday run-in has begun. Four weeks down, two to go. Amazing how something that seems so astoundingly long can rush past so astonishingly quickly. At the beginning of the holidays I was pondering - a trifle frantically - just how I was going to handle six weeks with two small children around. I trawled around in my brain for time-filling ideas to pass the long days by and yet, strange to tell, with only two weeks to go, I haven't managed to fit everything in.

Here, should you be looking for inspiration, are a few of the things we've done so far. 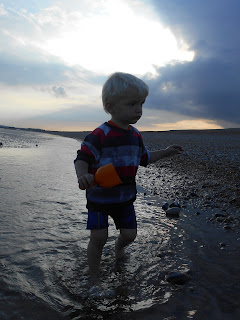 We Got Outside
OK, so in the Summer Holidays there are certain things which are pretty much guaranteed when you have children to entertain. A day at the beach is one of them and definitely among the most practical, offering children a fun and extensive playground and a fairly cheap day out. But what about an evening at the beach, once the crowds have gone home? It's quicker and you don't need to take a picnic so won't be condemned to eating sandwiches where sand is one of the main ingredients as well as part of the name. You'll still spend several days cleaning clothes, car and children but at least you probably won't need to take along a deckchair and windbreak when you go.

Staying closer to home, I sometimes managed to get out into the garden which is always much easier in the Summer months than at any other time of the year. Trampolines, sand pits, paddling pools or simply helping me with a bit of weeding have all proved efficient ways of filling up time postitively.

We Got Imaginative
Welcome to Dinosaur Land. 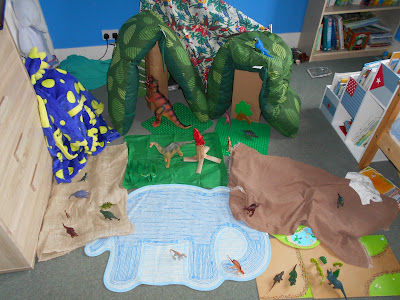 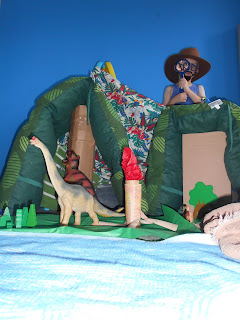 This took us ages to build but we had great fun doing it and found most of the materials quite easily around the house. Giant trees made from cardboard boxes and the cushions off recliner chairs. A swamp made out of an old brown towel and two paper bags to make it lumpy. Grass made from green tissue paper. Dry soil consisting of a hessian potato sack. A volcano made out of two cardboard tubes, coloured with crayons and with tissue paper lava. And of course, lots and lots of dinosaurs, roaming around the wooden trees from the family's wooden railway.

And if you wait long enough, you may even get a sight of the soon-to-be-world-famous paleontologist Professer Dolittle Jnr, complete with magnifying glass.

Alright, we made the beard and glasses out of pipe cleaners...

We Went to a Show 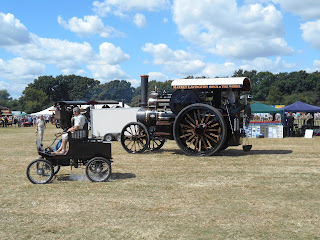 The Summer is show season. Country fairs, country shows and, in our case, the local steam rally. Here we see an ancient car overtaking an ancient traction engine - not quite Hamilton versus Rosberg! Brilliant for a kids' day out as there's always something to look at and, if the worst comes to the worst, there will be plenty of rides for them to go on and ice cream for them to eat. As parents we obviously have a responsibility to make sure our children are safe too, so it may be necessary for you to go on some of the rides with them. And sample the ice creams to make sure they're up to standard...

We Introduced Them to Things We Like Doing
I admit that I haven't really brought my boys up very well so far. It wasn't long ago when Graham would wander up behind me as I was watching Match of the Day and ask who it was that was playing cricket. Obviously this gap in their knowledge needed to be patched. They have a bit more idea now but looking at the picture below I'm not sure whether Isaac thinks he's batsman, umpire or simply one of the stumps! 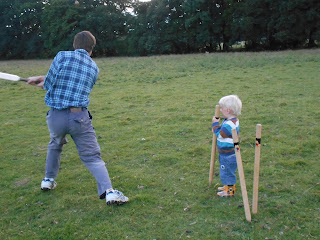 We Did the Things We Always Do
Yet, inevitably, most of the time has been spent doing the same things we always do whether it be Winter, Summer, Autumn or Spring. Graham listens to stories and draws pictures. Isaac does...what Isaac does. Mummy goes to work and Daddy settles down with a good book.