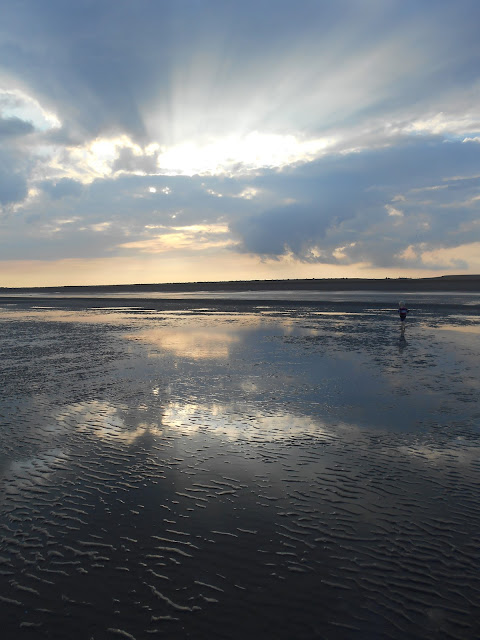 Under a sunburst sky, dwarfed by the scene around him, a tiny figure takes a walk across the beach. The tide is out. Capturing an imprint of the evening sky the salt water lies motionless on the wrinkled sand and trickles in little channels to the sea. Undisturbed. Alone. It is somewhere around 8pm on a splendidly atmospheric July evening; we - and Isaac - have the world to ourselves.

And the question I ask myself is: Why?

Welcome to the beach at Rye Harbour, East Sussex. It's quiet, it's late and most of the holidaymakers from the caravan site half a mile up a long concrete road have gone home for tea. They came out to enjoy the late afternoon sunshine when we did but none of them wanted to take the long walk out across the sand, dotted with cast-off shells and worm casts, to where the sea is rustling in gently on the shore. None of them stayed to turn and look back at where the dwindling sun suddenly streaked through the clouds in a fan of glittering rays. They were presumably all back home, settling down for tea, tucking the children up in bed and it was only our family who chose to ignore the childrens' bedtime and stay up late. Those other families will never know what they missed. We alone were witnesses to a tiny slice of majesty.

Not that the children cared. Graham and Isaac would only have known that the conventions of bedtime had apparently been delayed and that they were free to roam the wet expanses, splash in the salt pools and cover themselves in glutinous brown sand. They probably went to bed with large deposits of Rye Harbour beach still adhering to them. They loved it.

I used to like Winter. Under the right circumstances I still do but I have come to realise that, Christmas and snow apart, Winter is an adult thing. It's cold, it's dull and it gets dark early. Not many kids really appreciate the flip side - the frosts, the chilly moonlit nights, the snap of the freezing morning air. Their time is Summer. Long hot days, where it stays light 'til late and you can still be on the beach at half past eight. In a busy life it is not often we are able to take advantage of these times, where you can jump in the car after work and still have several hours of daylight before nightfall. This particular day we did. Why don't you?
Posted by Daddy Do-little at 12:45:00