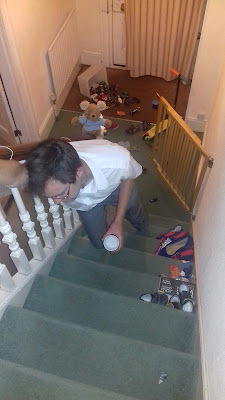 'Wee Willie Winkie runs through the town - Upstairs and downstairs in his night gown - Rapping at the windows, crying through the locks - Are all the children in their beds? - It's past eight o'clock!'

The Fantasy
Getting the kids to bed is easy. A bit of tidying-up, a brief bedtime story, a couple of other essentials and the little darlings are all tucked up under the covers within ten minutes. If they've had a busy day they'll be sound asleep in another five, which leaves several hours for you to relax and unwind before you follow them up the wooden hill for a long, refreshing sleep.

Listen! You hear that noise? That's hollow laughter, that is. Ten minutes. Ten minutes! Hey, I don't know which planet you think you're living on but I reckon they re-instated Pluto just for you. Or perhaps you only know perfect children? Obedient children. Children who are so monumentally un-bothered about playing with their toys that the call to bed is greeted with gentle cries of  glee. Children who don't believe in splashing in the bathtub, put all their books away once they've read them, go to sleep as soon as the light is switched off and would never dream of turning on their bedside lamp and reading instead of snuggling down for the optimum twelve hours. If so, I'd love to hear your secrets. Please write lots in the comments section below. Thank you.

Meanwhile, welcome to my world.

Bedtime delaying tactics
Phase 1: The go-slow tidy-up
This begins almost as an accidental by-product of unintentional slowness as a toddler but it isn't long before intelligent little minds work out ways to get the most from pre-bed de-cluttering. A floor covered in toys from several different boxes is a great way to start. Daddy, having picked his way through the mess hurting himself badly on bits of Duplo en-route, seats himself on the bed and requests action. Impassioned protests follow: the Duplo model can't be put away because he's only just made it; the train track can't go away because he hasn't had time to play with it yet; he doesn't want to put the toy lorry away because it wasn't him who got it out; etc, etc. An extended  period of bargaining results, in which the train track gets a reprieve, the Duplo model is moved carefully to the top of the chest of drawers to be put away 'another day' (whenever that might be) and Daddy agrees to take charge of the lorry.
"But everything else must go away," he orders, trying to preserve his eroded authority. "I'm going to count to twenty and if it isn't all tidy by the time I get there..."
Sudden frenzy of activity, diminishing rapidly after about ten seconds when child realises how slowly Daddy is counting. In theory there is a specific place for everything. In reality most of the 'odd' stuff (of which there is plenty) gets shoved into the nearest box. Daddy sighs, moves on to 'nineteen, nineteen-and-a-half, nineteen-and-three-quarters...'
"Finished!" comes the triumphant cry. There are a few articles still tucked under the bookcase but Daddy lets them go. They aren't worth the fuss and it's time to move on to...

Phase 2: The extended pyjama game
Who would have thought it could take so long to change into pyjamas? It's only when Daddy comes back in from a five-minute trip to the kitchen and finds his son sitting on the bed still half-dressed and staring dreamily into space that the reality hits home. It can take a long time, a very long time.
Even so, there's still plenty of opportunity for...


Phase 3: The extra long bedtime story
This takes more skill. A toddler, scarcely able to lisp their name, will probably settle for whichever book is put in front of them. Not so your plot-hungry four-year-old. He will settle for the longest story he can possibly get away with.
"This one Daddy?"
"Too long. Put it back."
"This one Daddy?"
"Still too long."
"This one?"
If he keeps on picking lengthy books the chances are that an impatient parent will give up telling him to find a shorter one and decide that even reading a child's version of Robinson Crusoe (or maybe even the grown-up edition) will probably be a quicker option. Fortunately the time may come when the kid can read his own story. Or is that a good thing...?

Phase 4: The sudden thirst for education
Most parents will harbour a hopeful desire to improve their child's mind. It is why we buy them computer games that teach them their alphabet and take them on a day trip to the museum instead of letting them watch TV during the school holidays. It salves our battered consciences. So what are we to do when, at 8pm, they suddenly ask to be allowed to read to you from their own book? Remind them that they have had all day to read the book and haven't taken advantage? Refuse on the grounds that it is too late and even some adults are already in bed and asleep? Of course we don't - that could seriously affect their enthusiasm for reading and possibly result in them failing to get a university place, becoming Chancellor of the Exchequer or landing a job as lead cameraman for Homes Under the Hammer. So we lean back, prise open our eyelids and listen patiently as they pick their way haltingly through the pages pausing on each page to make detailed and extensive comments. Surely things will speed up now...

Phase 5: The abbreviated teeth clean
Er, yes it does. Which isn't necessarily a good thing, this being one of the few parts of the bedtime schedule that we parents wish could last longer and the children are absurdly keen to get out of the way as quickly as possible, allowing more time for...

Phase 6: The bedtime singalong
Another guilt-generator. When that little voice pleads permission to sing you a song who are you - austere and adult though ye be - to dash their innocent infant wish? Inadequately lenient it appears. Still, that must be it now. Good-night, sleep tight...

Phase 7: The suddenly really-very-important question
Finally you've made it to the door. The little fellow is securely under the duvet and smiling at sweetly at your departing back. You turn at the door for one last good-night. Mistake!
"Erm...Daddy..."
Uh-oh!
"Yes?"
"Erm...Daddy...Erm, I need to ask you something."
"Yes?" Those nerves are beginning to jangle now.
"Erm..." (Long pause while he searches in his mind for a suitable question - any question. Daddy's like the cat on the hot tin roof: he can't keep his feet still. His face is contorted into an enquiring smile.)
"Erm...Daddy...What day is it tomorrow?"
"Tuesday." (Hopefully by keeping the answers short it'll be over quicker. Some hope!)
"Erm...Do I go swimming on Tuesday?"
"No, you go swimming on Friday." (Eyelids are starting to flicker uncontrollably, sadly out of time with his tangoing feet.)
"Oh...when is it going to be Friday?"
"Well today is Monday, tomorrow is Tuesday, then you have Wednesday and after that..."
Five minutes later, quivering slightly and jittery as a flea, Daddy eventually makes it downstairs. It's nearly nine o'clock.
Good! He relaxes. That gives a good hour of downtime before he needs to think about bed. Nothing to worry about, nothing to do...
"Ow!" He looks down to find a toy car under his foot. Lifting his eyes he sees another, then another and another. It appears that the lounge floor is completely covered in toy cars, not to mention teddy bears, Duplo blocks and several noisy children's toys.  His eyes glaze over.
Oh well, at least the children are out of the way...

Phase 8: "I'm bored!"
There is the patter of tiny feet on the stairs. A little figure appears in the doorway, eyes bright, solemn expression on its face.
"Daddy, I'm bored!"
"You can't be. You've only been in bed five minutes."
"Well, I'm just bored."
"No you're not! Now get upstairs and don't come down here again!"
"Can I have some music on to send me to sleep?"
"No!"
Oh, pleeease."
"No!"
"But, Daddy..."
"Go to bed! Now!"
"Can I have a drink of water?"
"Er," (final attack of guilt) "I'll bring one up. Now go to bed."
The small figure departs. Daddy turns, bends down and begins, in lacklustre fashion, to fling toy cars into a nearby box. Only this, a bit more tidying-up, and a dishwasher to fill and he can finally relax. Quickly now.
A strident voice comes echoing down the stairs.
"Daddy! You forgot my water!"

Outside, the street lamps are shining brightly and the moon is rising majestically into a starry sky. A strip of yellow light peeks in through the window at the weary figure clambering up the stairs, mug in hand. It follows him along the landing and in at the open door. A clear voice speaks.

"Daddy, I wanted it with a straw!"