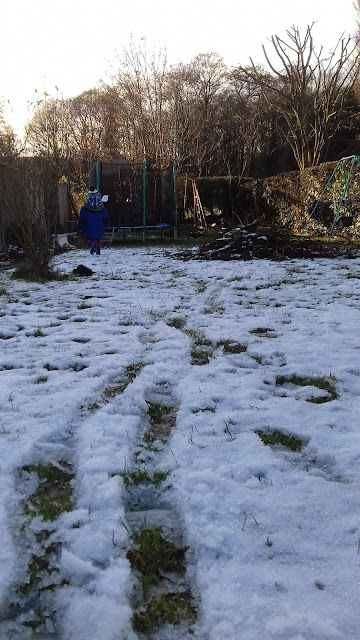 Remember the Winter of 2009-10? Boy! That was something! Snow, followed by snow! Days off work, drifts, hillsides chequered white and black with snow and sledges. In Folkestone, where I was living at the time, we even had snow on the beach! Imagine that! Snow on the beach! Talk about Artic conditions, dude!

And then, hey! Remember the next Winter? We were walking in snow on Christmas Day that time! OK, so we didn't actually have any snow fall on Christmas Day, as far as I can recall, so that torpedoed my first real white Christmas but, frankly, who's caring? We had the white stuff! Crunch, crunch!

Because, the thing is, the thing that really needs to be mentioned here, the thing that really made those horrendous, but horrendously fun, snowfalls stand out is that they were really, really rare. I had a childhood where one inch of snow was exciting and you had to ignore the fact that you could still see the grass through the slush. I spent hours staring out of the classroom window at the whirling flakes hoping that there would be enough snow for the school to close and all of us to be sent home. But in vain. There never was.

So, I had fun - what kid doesn't? But the fact still remains that I had to wait until I hit my mid-twenties before I had a decent bit of snow that I could actually claim (without guilt) a day off work for. But it was guiltlessness mixed with regret because, well, it looks a trifle stupid for a grown man to be out building snowmen in the street unaccompanied by children. Or to play snowballs for that matter. Actually, it looks a trifle undignified for a grown man to show marked approval of snow in any way. He should be moaning about his car getting iced up, hurling insults at the TV because all the airports are closed ("Ridiculous!!! They can cope in Sweden!!! Why not here!!!" - Sorry, more ! marks - my bad...) and rushing to the shops to stockpile food and other essentials in a vaguely panic-stricken way against the monumental 3ft snowdrifts that are predicted hourly. That's the dignified, manly thing to do.

Now that I have children of my own, of course, I can build snowmen and hurl snowballs as energetically and enthusiastically as I want; all the in the name of positive parenting. (Bouncing on trampolines, stroking rabbits at children's farms and going down the slide at the park are also examples of positive parenting, by the way.) Except that I can't, because after a mad couple of years the supply of snow has dried up again. Every year the red-top papers predict arctic blasts and mind-numbing cold and every year they are pretty much wrong ("Yeah, well, who actually believes anything they read in the Mirror anyway?").

So we endure, or manage with (depending upon your point of view) what we have. We had snow in January and a bit more in February. Today, as temperatures soar and the skies become bluer and more Spring-like I leave you with a photo of the January instalment, as a reminder of my own childhood. It will probably be twenty years before we get anything like 2010 again and from now on it'll be our kids gazing longingly out of the classroom window waiting for the blizzard that never comes while we responsible adults make stern remarks about the evils of snow and secretly wish it would come down a bit harder so we can go home too. Never can anything be so simultaneously adored and detested. Roll on Spring; at least everybody likes that.