Another One Fights The Dust! 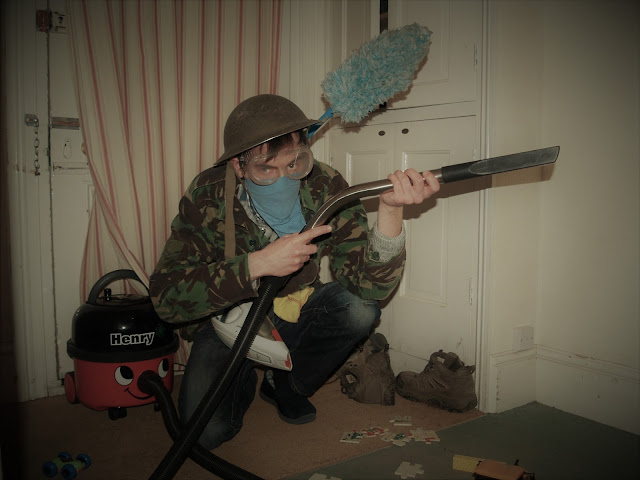 They say that an Englishman's home is his castle but it often felt to Dudley Ambrosius Dolittle (aka 'Dad') as though his own fortress was in a constant state of siege. That terrible trio of Dust, Dirt and Disorder were continually attempting to wreak unauthorised havoc wherever they could gain a foothold. Raiding parties of spiders festooned the kitchen in cobwebs. Hordes of crumbs spread themselves across the dining room and arrogant armies of dust marched in full battle array over every surface and made alliance with filthy, bacteria-ridden dirt behind the washing machine and tumbledryer. Even the garden wasn't safe, as bands of persistent weeds encamped on the veg patch and vicious ivy tried to infiltrate the house through the doors, windows and even underneath the roof.

When you add in insubordinate behaviour from Private Possessions who refused to be confined to the Toy Box Barracks and sustained campaigns on the part of General Clutter, assisted by his unscrupulous sidekick Major Mess, you were left with one embattled custodian. It was, 'Dad' thought gloomily, rather too much for such a sensitive fellow as himself. Here he was, simply looking for a quiet life, yet forced to endure perpetual bombardment from every quarter, nook and cranny.

Of course, 'Dad' had not been idle through all this. Well, that is to say, he had been idle because it was part of his nature, but he occasionally made half-hearted efforts to stem the encroaching tide. First of all he'd sought help from Henry, a cheerful young warrior with a red, jolly face and a happy smile. Henry was an all-rounder in more ways than one; not only was he excellent at destroying cobwebs and removing dust and crumbs but he was also physically round, being cylindrical in shape. It was a family trait that he shared with his sister Hetty and brothers George, James and Charles, although they all dressed in different colours.

Unfortunately, good though Henry may have been at eliminating cobwebs he wasn't much help when it came to resisting General Clutter. Plus, he couldn't act without direct supervision from 'Dad' himself. Left to himself he would just sit in one place and hum noisily. Other enlisted soldiers - stubby-nosed 'Handheld Vacuum', slim 'Feathers Dusty' with the blue rinse hair and even 'Mopan Bucket' (a bit of a wettie) - were similarly deficient. 'Dad' had tried asking his own sons for support to combat the General but they were seldom much help. 'Dad' occasionally suspected them of being Fifth Columnists, so ready did they seem to aid and assist the Menace in his mischief. It was bad enough when your own children threw their food and toys at you; it was ten times worse when they refused to pick them up afterwards. Perhaps they simply hadn't had sufficient training.

It was just as hard in the garden. 'Dad' had put in quite a lot of spadework to combat the invading weeds and had even tried populating the vacant veg patch territory himself but whenever he returned to check on his dominions (and its minions) the weeds would be back - in force. They were like the heads of the mythical Hydra: for every one cut off two more would grow in its place. It was enough to make even the keenest gardener think about chucking it all in and turning the place over to grass and 'Dad' was not the keenest gardener. That involved far too much effort. As it was, he crawled home after each offensive, tired in body and mind, to be greeted by a chaotic house and a wife back from work and demanding to know why he hadn't tidied up yet. There must, thought 'Dad' wearily, be a better way.

Then, quite suddenly, he thought of it.

The house was quiet, or nearly so. Both children were watching a DVD, the remains of a simple tea consisting of jam on toast spread out over the table, chairs and floor around them. Remarkably some of the toast was jammy side up; the rest was gathering dust and oozing into the carpet. A pile of saucepans and plates was tottering in the sink, more plates were sitting on the worktop and one or two had rolled onto the floor, where they had been joined by a knife, two forks, three spoons and four plastic cups. From the safety of their well-developed webs, high on a dusty cupboard, five spiders looked down with interest. Had they wished they could have turned and peered into the hallway where the overspill of toys from the lounge was creeping across the muddy carpet like a slow-moving tidal wave.

Comfily seated on a sofa in the lounge, having carefully cleared himself a space among the shredded remnants of a clothes catalogue, Dudley Ambrosius Dolittle seemed completely unaware of the confusion around him. He was reading a book, a silent Henry acting as a footstool.

There was the sound of a car pulling into the drive. Then a key rattled in the lock. Something dragged across the mat as the front door was forced open.
"You'll have to push a bit harder," 'Dad' called helpfully. "There's a few toys on the floor!"
He could hear heavy breathing as the door was heaved back. Then it slammed shut. His wife appeared, looking hot and dishevelled. There was a piece of uneaten toast, jammy side up, stuck to her shoe and a smudge of something white on her elbow. She looked around her, eyes wide, then jerked her head up as a sudden burst of music came from the dining room where the children were watching Thomas The Tank .
"Are they not in bed yet?" she gasped.
"What? The kids? No."
"Why not?"
"They're watching a DVD."
She stared around. "This place is a mess! It looks like a bomb's hit it!"
"Yes, I haven't tidied up yet."
"Why not? Have you had a bad day?"
"No, it's been a very relaxing day actually."
"Then why haven't you cleared up?"
"Ah, I was coming to that," 'Dad' said easily. He closed his book and stood up, carefully avoiding the toys scattered around him, and stretched. "Truth is, I'm feeling a bit tired at the moment so I thought perhaps you could clear this lot up, put the things in the dishwasher and get the kids to bed and I'll make us both a nice cup of tea. " He smiled at her encouragingly. "How does that sound?"

The events that followed are unedifying and do not show wedded bliss in its best light. Dear reader, let us draw a veil over them and, like a defeated army in the hours before dawn, slip quietly away.

(Most of the above is fictional. My wife is lovely. DD)

Email ThisBlogThis!Share to TwitterShare to FacebookShare to Pinterest
Labels: It's a Dad's Life