Why Thirty-Something Dads Can Never Win 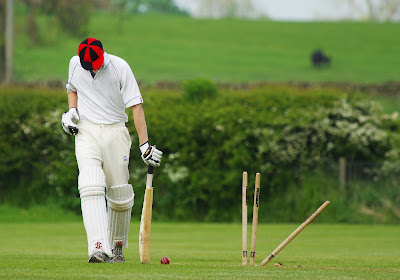 It is only now that I have launched into my early-thirties that I realise the error of being a sports fan.
It is at this age that it becomes apparent that sport is mainly an occupation for youth (golf and darts excepted); for vibrant young things in their teens and twenties, with bright futures and pasts that haven't yet materialised. For those who are older it seems as though time ticks faster. The gossip asks how much longer they can go on. Commentators question whether they have the same zip and verve as of yore and the deadly word 'Retirement' hangs above their heads like a ghostly axe just waiting to fall. Few people commence (or even re-commence) upon distinguished sporting careers in their thirties. If a footballer is picked for the national team at 34 people wonder why (just ask Jermain Defoe). "Has the well run dry?" they ask; "The bottom of the barrel been well-and-truly dragged?"

And for those of us tooling along at roughly the same age it clouds our point of view. We suddenly see our sporting contemporaries disappearing from the field of play and reappearing in the commentary box; firmly and irretrievably retired. It makes us feel elderly, as though Old Father Time was plucking at our sleeve and whispering 'Carpe Diem' into our ear.

We grasp at straws. Rafael Nadal is still world tennis Number 1 we argue, Usain Bolt was still 100m World Champion at the age of 30, Gianluigi Buffon still one of the world's best goalkeepers at the age of 39 and (going back a bit) cricketer Jack Hobbs made half his 197 first-class centuries after the age of 40. But hope has qualifications. Nadal may be Number 1, but he is the oldest man to be so. In his last race the recently-retired Bolt lost his 100m World Champion status to the even-more-aged Justin Gatlin (clearly the supply of young sprinters has dried up) and the even-more-recently (internationally) retired Buffon had his Italy team kicked out of World Cup Qualification by Sweden. Proof is minimal, but even so we find ourselves wondering darkly whether Hobbs' post-forty success was due more to opposition bowlers' respect for his grey hairs than real cricketing prowess.

It is a fact, as a parent, that you can never win. The rules dictate this. If you run a race against your infant child the possibility of victory should never enter your head. Whatever their sporting ability and the disparity in your respective speeds, the child must win - if you don't want to provoke one tremendous sulk that is. And it doesn't matter how many times you tell yourself that losing occasionally will be good for them, you can never bring yourself to do it. My worry now is that, after years of 'losing' to avoid the tantrums, the day is rapidly approaching when I will be losing because I can't help it. After all, it can only be a few years before my children enter their sprinting prime and leave their labouring parent puffing behind them. The temptation is to win as many races as possible now so that I might savour the memories in the arid years ahead - but... I can't do it. Not every time anyway...

And, worryingly, even now there are some things at which my elder son can beat me, even without any manoeuvring from me. He and I were playing a game of 'Matching Pairs' the other day - a simple game which rewards a retentive memory - and I knew that a bit of careful 'forgetfulness' would be necessary to ensure that I lost. It was only when I rapidly found myself two games to nil down, without any intentional 'forgetfulness' on my part, that I realised I was in a battle. Strenuous mental effort contrived to draw me level, the fifth game, I believe, was halved and I lost the decider, humbled 3-2 by a six-year-old. No doubts: the writing is on the wall. How long is it going to be before he's beating me at chess and Chinese chequers as well? Tick, tick, tick...

There is one solution. I need to find an alternative reference point.

Sportspeople, whose careers operate exclusively in fast-forward, are an exceptionally unsuitable method of charting the ageing process. For those in search of comparative youth it would surely be better to align oneself alongside civil servants, business entrepreneurs, Governors of National banks and politicians where age and experience can often be seen as more of an advantage than an impediment. Upstarts like Emmanuel Macron may be trying to change the face of world politics but surely it can't be often that a thirty-something politician is viewed as anything other than a talented apprentice, who may have a bright future. An MP who enters Westminster at 30 must be forever fending off suggestions that they have left their Nanny in the car and queries as to whether they need a mid-afternoon nappy-nap.

Sports or politics? For longevity it has to be politics.

There is one problem. I'm not interested in politics and I do want to know how England are doing in the Ashes. After all, 32-year-old England batsman Alistair Cook is a father too.