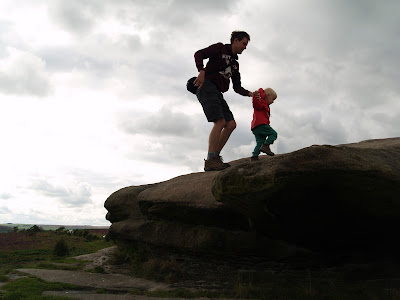 Then Jack comes over. Jack is in his fifties. His tanned face is lined and his eyes twinkle with the wry glint of one who knows what it is to sit up into the wee sma' hours over the bottle. The baby's bottle that is - for Jack has three children of his own and has just recently become a grandfather. He pauses at your desk and then leans over you with the benign authority of one who is about to impart a bit of news. His mouth quirks up slightly at the corners.
"Make the most of it James," he says, wisely. "They soon grow up..."
"Yeah," you say, meaning "Yeah, right!" Soon grow up! It's a baby, dude! The kid's only two weeks old!

But, blow me down, there's some truth in the man's words after all. Even though our two boys are still firmly in the 'infant' bracket they are, nevertheless, defiantly working their way through the 'growing up' process. I'm already finding myself grasping vainly at a vanishing past, trying to preserve tottering toddler adorability before it's gone and gone forever. Why, I could have wept when Isaac started calling his brother 'Graham' instead of 'Baymam' and I can absolutely assure you that if he ever begins to say 'animals' instead of 'aminals' it won't be because I approve of the change.

And yet, we parents are contradictory creatures. While wishing that the cuddly cuteness could last forever we are simultaneously searching hungrily for each and every sign of progress. We exult over baby's first word without considering that this now means we need to teach them the etiquette of polite conversation (i.e. it ain't okay to keep saying 'Mummy' until she gets fed up, sunshine). We teach them to cycle and then want them to cycle more slowly so that we can keep up. We encourage them to run and then find ourselves wishing that they would occasionally walk. We want them to be the best, biggest, brightest and brainiest without considering that this may require a corresponding reduction in appealing childishness. We want them to stand on their own two feet and not be always bothering us to build them Lego models but live in secret fear that one day we're going to wake up to find that the tootling toddler has changed into an acned teenager, slouching downstairs in his pyjamas at midday mumbling something about his iPhone.

It is a conundrum that could conclude in a lifetime of constant dithering...as though one had drunk deep from an enfeebling cocktail of unfulfilled ambition and regrets.
(And that's hyperbole for you...)

There is only one, two or maybe several solution(s): Embrace the Inevitable, Appreciate the Present, Face the Future and Savour the Past.

Oh, and get as much of it down on camera as possible. Your son's voice isn't gonna stay unbroken for always, you know, and a childhood rendering of 'Twinkle, Twinkle, Lickle Star' is absolute dynamite for a best man's speech.
Posted by Daddy Do-little at 13:04:00