I hate that term: 'househusband'. 'Stay-at-home-dad' is, for some reason, preferable by far. Either way, as of tomorrow, that is what I will be because tomorrow my wife goes back to work.

I'm pretty much ready. There's just a few little things I still need to get: a Costa Coffee loyalty card, one of those frilly white aprons and a pair of new shoes; yes, definitely a pair of new shoes. After all, everyone knows that stay-at-home-mums spend most of their time going out for coffee with their friends and gossiping. They might occasionally do a bit of dusting to keep up appearances; that's what the apron is for - I've already got a good duster. Apart from that, it's a life of constant leisure unsullied by any of the manual chores which seem to miraculously re-surface as soon as Dad gets home. Most working dads wonder how it is that houses become self-cleansing, nappies become self-changing and meals become self-cooking as soon as they get out of the door; well, I guess that I'm about to find out.

Of course, it's a well known fact that stay-at-home-dads do even less than stay-at-home-mums, spending most of their time crashed out in front of the telly. I don't actually have a telly so I'm going to have to rely on my DVD collection to see me through. It's been a while since I've watched my set of Tom and Jerry and I'm looking forward to getting re-acquainted.

Having said that, I'm a realist and I'm aware that things may not always go according to plan. There could be problems, difficulties, concerns. I might run out of DVDs, I might run out of popcorn and crisps, the microwave might break down; even worse, the fairy housewife who does all the work when Mummy is out may not realise that there's been a change in personnel and could show up late for duty. In short, catastrophe.

Even so, I'm confident I can manage for a couple of days at least. True, I have been known to be late with children's meals and me and my ironing board have never really been good friends but, on the plus side, I've been able to find my way to pre-school without the aid of sat-nav for several weeks now, I can tell the difference between a dishwasher and a tumbledryer without prompting, I'm expert at cooking anything which has 'on toast' featured prominently somewhere in the title and I've even been known to change a dirty nappy.

As a well-known BBC presenter was once so fond of saying: 'How hard can it be?' 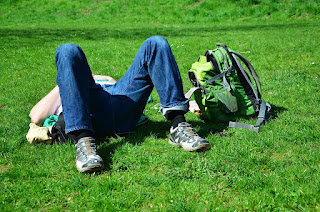