The Joys of Autumn 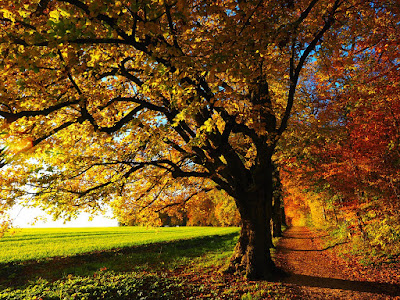 Autumn is here but Summer has not yet gone. It's October, but the days remain warm, skies remain blue and shorts remain a viable clothing choice rather than being packed away until the Spring. These are days to treasure where every cloudless morning feels like a moment snatched from the clutches of the Autumnal rains. Yet this is rather a harsh indictment of what can be one of the loveliest of the four seasons. Winter is memorable for its snappy days of frost and pastel skies, Spring is all vibrancy and vivacity, Summer is drowsy but Autumn, at its best, is a placid shift from an August afternoon to a January night. There is the last outrageous burst of activity as Summer bids farewell in a riot of yellow, red and brown, the rich fruiting in the hedges and trees and finally the modest fade into the starkness of Winter.

Graham is a fan of Autumn for other reasons. For the first two weeks in September he could often be heard saying hopefully, "it's Autumn now" or "it's nearly Autumn". There are two main reasons for this: blackberries and conkers.

Blackberries, of course, usually appear before Summer has ended. They are both an innocent indulgence, in that they are totally free and can be eaten 'while you pick', and proof that even the most annoying things, such as brambles, can have a positive use. It is one of life's ironies that a plant that is so prickly, and so prone to take over your garden can also produce one of the most tasty fuits in the hedgerow and blackberry picking trips have rapidly become part of the calendar for our family as a result.

Conkers are the opposite of blackberries. They grow on a tree that is as majestic and regal as brambles are ragged and humble, they have a protective shell whereas blackberries do not and they are hard where blackberries are soft. They are also practically useless. Despite this they are a boyhood treasure, either to play with or simply to collect. The joy of 'conker-finding' has gripped Graham well and truly this year. We have daily visits to increase his collection and I, in true parental mode, have discovered some ways in which conkers can be put to good use. As follows:

1) Daily exercise. Graham zooms around on his scooter, scooping up conkers en-route. Dad ambles along behind with old army haversack to collect them in.
2) Nature studies. We discover that conkers have a hard, spiky shell.
3) Maths. Once gathered the conkers are counted out one by one into the tub where the collection is kept. Last weeks' bag: Monday 20, Tuesday 22, Wednesday 48, Thursday 26, Friday 19, Saturday 3.
4) Sibling entertainment. Younger brother Isaac was ill last week which made him miserable. We found that being pushed around in his pram while gathering conkers actually cheered him up.

Of course, the downside to Autumn is that the good times don't last long. Conkers may last a fortnight and even the blackberries are beginning to wither now. Carpe diem, as the old man said; then find something new. Veni, vidi...what's next?
Posted by Daddy Do-little at 04:29:00