Why December 1st is Special

December the first is special for two reasons.
1) It's the day that advent calendars start.
2) It's Isaac's birthday.

At about this time a year ago - or perhaps a little earlier - I was sitting in the cramped corner of a hospital ward, a book on my lap, bags piled around me and probably dining on a varied assortment of sandwiches (from a packet), cake (from a packet) and Pringles (also from a packet) purchased from the hospital shop. The new father living it up.

Yes, hard though it is to believe, it is now a year since Isaac entered the world. Perhaps it would be worth just noting down a few details of what he is like at the age of one, just for the record. Well, he can't walk yet, although he can stand unsupported for several seconds. He has four teeth, two at the top and two at the bottom and is a great devourer of any sort of literature which is left where he can find it. He has a scream louder than a parrot on steroids, is a great lover of chocolate cake (can't see that one changing) and is able, by rocking energetically to-and-fro, to move his high chair across the kitchen floor unaided. What other details are there worth knowing?

Of course birthdays are special for other family members too and Graham has been looking forward to this day for a while. Last week he kindly chose Isaac a birthday present which he then kindly tested out before it was wrapped. This morning he kindly helped him unwrap it and then kindly showed him how it worked. Whether Isaac will ever be given any opportunity to show what he has learnt from this generous tutorial is a moot point.

It's encouraging to see such a positive spirit of give and take in the home: Isaac likes 'reading' Graham's books and Graham likes playing with Isaac's birthday presents. The only time there is a teeny-weeny bit of controversy is when both children happen to want the same things at the same time or when the older sibling may fear damage to his possessions. Happily there is a solution to even these minor difficulties: it's known as Big Brother Rules, OK! Sometimes it happens that Little Brother may raise an objection: in such circumstances the Law of the Parent generally replaces all other legislation. This law is, at present, superior to others and contravention of the same is forbidden.

Actually there are very few occasions when such drastic measures are required as the two children do get on quite well. Still, I have to wonder how many new regulations we will have to introduce into the home when the currently law-abiding one-year-old finds his feet and starts to walk on them. He's already started dropping food onto the floor if he doesn't like it so I fear that the present state of quiet can't last much longer. For now let peace endure and don't stint on the birthday cake. 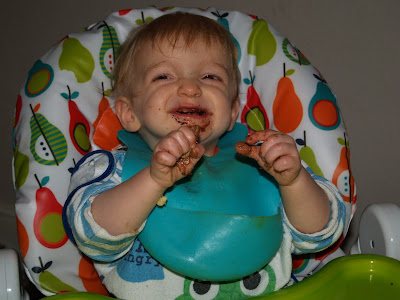