The Importance (?) of Ancestors

I'm a man of Kent born and bred - but for a brief three-year sojourn in Southampton in search of a degree. But it may so easily have been different. My paternal grandfather only moved East from Sussex in 1949 and, two generations later, even I feel that many of my roots are still inextricably entwined in Sussex soil. Many of the old family tales came down to me coated with a layer of mystery - as of places familiar and yet unfamiliar, of people known to me only through old photographs and stories - a jigsaw with only a quarter of the bits filled in. This lends excitement to them and in no way detracts from the interest of listening, even if I am sometimes sitting there saying silently to myself, "Er...who? Where? What?".

Roots, even when obscured, are important, as several million trees dotted about the planet would testify. I remember having a conversation with a group years ago about names for children. One person was adamant that she wasn't going to give her children any names that had been used in the family before: no naming her son after a maternal grandfather or any of that rubbish she declared. I (silently) disagreed, as befits someone who has three names, every one of which appears in my family tree somewhere. I like the idea that names are perpetuated throughout a family line, creating a link with our ancestors. It need not be onerous or create undue pressure on the child involved, particularly when used as a middle name but, speaking for myself, it has given me a sense of where I came from. I hope that Graham and Isaac feel the same, although it's a bit late if they don't...

If names are important so are locations and last Saturday my brother and I nipped across the county border to do a little exploring around the area that our grandfather left all those years ago. It was a warm day and the ground underfoot was boggy and wet. We squelched happily over the green hills and along the quiet country lanes until we arrived at our destination: a large reservoir. Somewhere under that reservoir a chunk of family history lies hidden; not a large chunk, simply a cottage where the family used to live a few years before the water was let in to cover it. Obviously we couldn't see it but we wandered through the woods around the lake and stopped to look at a view that perhaps, despite the iron gleam of the reservoir way below us, wasn't so very different from the view our ancestors would have seen. Foolishly sentimental or simply another small piece of the jigsaw? Probably a bit of both.

Who knows what my own children will think of their forebears. For my part I've always been proud to know I had a grandfather who fought in the trenches, even though I never met him. The boys may not feel the same and if they don't I daresay it won't greatly matter.

But, on the other hand, perhaps one day they too will want to cross the border into Sussex, to slosh down a muddy track to where a small cottage, like much of their history, lies obscured and they will stand at the water's edge and look across the hills rising from the opposite bank and feel, as I did, a small and tangible link with their past. It's not impossible because the truth is that a large part of understanding who we are is to understand where we are from. 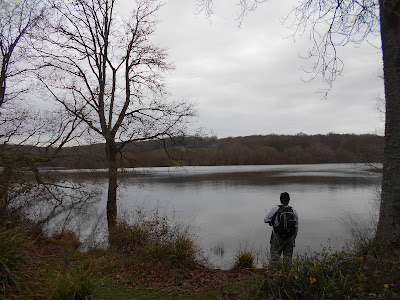