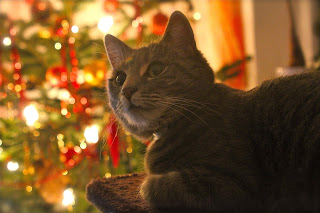 SELF: Guess what? I saw a Christmas tree the other day.
SOME OTHER BLOKE: Wow. You do know it's December now?
SELF: Yeah, 'course. But this tree was different.
SOB: How? Was it pink?
SELF: No, it was green. It was in a cage.
SOB: Shipping crate?
SELF: No, wire cage.
SOB: Don't be silly! Oh, I get it. You saw a Christmas tree through the chain-link fence of a garden centre and got confused. Should've gone to Specsavers mate.
SELF: Funny. It was in a photo.
SOB: Thought you said it was in a cage.
SELF: Yes. It was a photo of a Christmas tree in a cage.
SOB: The photo was in the cage?
SELF: No. The Christmas tree was in the cage and someone had taken a photo of it. I saw that photo. Get it? Now will you be quiet and let me finish what I was saying!
SOB: Sooorrryyyy.
SELF: Honestly! Thank you.

So, as I was saying, I saw a photo of a Christmas tree in a cage the other day. It was a big Christmas tree - a floor-to-ceiling model - and covered in decorations. The cage was also floor-to-ceiling and, like the decorations, covered the tree completely. Apparently it was intended as a humorous suggestion for keeping the family cat away from the tinsel and baubles. Safe, secure and - as the website remarked - better than putting the cat in the cage instead (http://www.viralnova.com/christmas-cat-war/).

Our family doesn't possess a cat but we have our own problems. As my sarcastic alter ego remarked above it is now December and Christmas is coming up fast. Christmas usually involves the erection of decorations in some way but with infants on the roam in the home this can be difficult. A Christmas tree sitting invitingly at ground level would be as much of a magnet for a plodding infant as it would for a cat. All that lovely shiny tinsel, those twinkling lights and interesting electric wires! Indeed, I believe that an inquisitive Isaac would wreak more havoc amongst the Yuletide decor than even the most maliciously marauding moggy. More to the point Isaac might end up getting damaged himself which is rather more of a concern to me than a few toothmarks on the baubles; and it is for this reason that we have decided against having a Christmas tree in the lounge this year. In the attic she remains, our battered faux fir, wrapped in black bin bags, her place beside the fire gaping vacant.
Sadder still, she has been supplanted by a younger, more petite model; a three-foot beauty gorgeously arrayed in glittering fibre optics and bountifully be-decked with baubles of green and scarlet and gold. The Little Miss sits in Graham's room, well out of the reach of grasping infant fingers, so at least one member of the family has a tree to look at and admire.

So far that is the furthest extent of our Christmas decorating activities. Even the strings tied about the room for putting cards on remain filled with birthday cards - one minor disadvantage of having a birthday in November. Oh, to be a January birthday card! To have a whole year for hanging around to be admired! But the earliest birthday in this family is September. Anyway, today the birthday cards must come down and/or be relocated to make room for robins, snow and Santa Claus. Our Christmas cards need not fret over having a short display life though; not being superstitious I have never worried about taking Christmas decorations down by January 6th so it is likely that our cards (and tinsel if we ever get round to putting any up) will still be dazzling unwary visitors in the middle of February. Earlier this year I still had one Christmas card on my desk at work in April - it had become part of the scenery by then and I couldn't bear to part with it. Tradition states also that decorations not taken down by January 6th should remain in place all year to avoid misfortune. Sadly, my Christmas card went into the bin in May. Oops.


So much for that. To paraphrase Lewis Carroll: 'The time has come,' the Family said, 'to speak of many things: Of lights and glitter and Candy sticks - of selotape and strings - and why Christmas pudding is steaming hot - And whether reindeer have wings.' In addition to - and in other words - where did I put that old box of decorations?
Posted by Daddy Do-little at 07:18:00