Crucial Childhood Questions #3: Why do Children have Selective Memories? 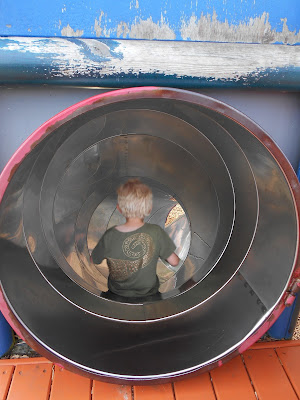 The pre-school run
Anyone who's got a child old enough to go to pre-school or nursery will know what I mean here.
It's the end of the day (or half-day). You arrive to pick up your child and a small figure hurries out to greet you, jumper trailing on the ground, and thrusts a soggy piece of A3 sized paper into your hand. There are the usual enquires about shoes (dumped untidily underneath their peg), coat (it's 3 degrees Celsius outside but they don't want to put it on) and hat (still inside somewhere) and then with the little one trotting at your side you begin the walk home.
"So, have you had a fun day?" you ask brightly.
"Yes."
"What did you do today?"
"Nothing."
"What? Nothing at all?"
"No."
"You must have done something!"
"No-o. I didn't."
"So you just sat and stared at the wall all day?"
The mild sarcasm goes unnoticed. "Yes."
You unfold the soggy piece of A3 paper and hold it up. The page is covered in colours - red, blue, yellow and green - which have mostly been sploshed together to form an unidentifiable mess of dirty brown, not yet dry.
"So who did this painting then?"
"Oh, that was me."
"Right, so you did do something!"
"Yes."

The interrogator
So now we come to what the writer P.G. Wodehouse used to call 'the psychology of the individual'. Other, less fluent scribes would call it 'understanding your man'. The parent, caring for neither of these, simply begins a series of targeted questions based upon their own knowledge of their own child.
"OK, you did a painting. Did you play outside?"
"Yes."
"Did you play in the sandpit?"
"Yes."
"On the cars?"
"No."
"Did you play with your friends?"
"Yes."

And so on.
By using this method, before long the parent has revealed that, far from doing nothing, their wee bairn has been so busy that it scarcely seems possible for them to have crammed it all into a single morning. They've done a painting, played in the sandpit, fallen off the tricycle, found a beetle under the hedge, done some dancing, had a story read to them, had an argument over a toy tractor, dropped their hat into a puddle, grazed their knee and done many other things which were clearly so unimportant that they weren't worth mentioning. The pre-school's reputation remains intact. It's obviously not the dull and uninteresting place that your child made it seem in the first place: a place where the well-used children's toys are just for show and toddlers spend their time sitting in monkish silence staring glassily in front of them. Not so. Things do actually happen there.

An elephant couldn't do better
Elephants have famously long memories. So do frogs, eels, swallows and a host of other wild creatures, but elephants trump the lot. So, it may interest you to know, do infants - but it's not foolproof. In the excitement of their normal play, small children will forget something you told them about five minutes earlier. Sometimes they forget things that you tell them about several times a day - like flushing the toilet, or taking their shoes off when they come indoors - mainly because these things are of such minor importance to them that they do not consider them worth remembering.

But it is a different tale with some other matters - sweets, cake, a bedtime story, a half-promised trip to the zoo 'later in the year' - all these things are voraciously stored up and produced for parental review on frequent occasions. And then there are the other times when some half-forgotten event resurfaces randomly in their brain and they come to you for help.
"Daddy, do you remember we went to that place with the tall, green hedges and there was a blue man there with a long stick?"
"Er, no..."
"He was a blue man and he had a sort of cough and he was showing us a yellow plant. You remember daddy."
"Er..."
Eventually you work out that they are talking about the time you took them to visit Great Uncle Rodney, who was just recovering from a cold and was dressed in blue overalls because he was outside working in the garden. Then you realise that you haven't seen Great Uncle Rodney for at least eighteen months and yet, for some unknown reason, the memory of that day has remained stashed away in the child's brain until now. Remarkable indeed.

No cause for alarm
Actually, of course, children's memories are no more selective than their parents'. It just seems that way. Whereas we forget where we put the car keys and only remember that we've run out of milk when we open the fridge door, they forget to wipe their feet on the mat and wash their hands before dinner. For both parties a selective memory is simply a means of jettisoning something which doesn't seem important in order to make room for something that is.
The difference is that adults are better at managing it. Or more concerned about hiding it...

Thank you...
...for taking the time to read this article. If you thought it was a load of rubbish, please forget you ever read it.