It's Not Christmas! It's November! 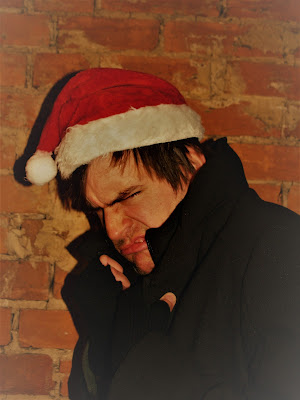 Saying that the Christmas frenzy starts earlier and earlier each year has become almost as much a part of the festive season as Santa Claus and mistletoe. Apparently there must have been a time - way back in about 1857 - when people woke up on the morning of December 24, sat up in bed with a jerk and exclaimed "Hey, you know what? It's Christmas day tomorrow!" then rushed out to buy a few presents. Those days have long gone. Now the ironic comment on most lips is that Christmas starts round about the time that Christmas ends. After all, where better place to buy next year's family prezzies than in the Boxing Day-cum-January sales? (Until they become permanently displaced by Black Friday, that is.)

This may be an extreme view but I don't feel it's totally inaccurate to claim that the limbering up process for Yuletide does start embarrassingly early. Like the shops who brought in all their winter stock at the end of August this year and then found themselves without customers when the warm weather continued well into October, there is something vaguely ridiculous in the sight of holly and Christmas lights when it's thirty degrees outside and the sun shines brightly down from a blue sky obstinately free of snow.

Happily for those businesses anxiously anticipating the Christmas rush it looks as though the Indian summer has finally given way to the English autumn. The clocks have gone back, there is a new chill in the air, rain clouds have rolled in and rough winds are unpicking the leaves from the trees more efficiently than the temperate sun ever managed. Shops are agleam with lights and tinsel and clamorous with the din of dancing reindeer teddy bears carolling "We Wish You a Merry Christmas" in deep, jolly voices that sound as though they were singing with their tongues stuck to the roofs of their mouths. At home, our eldest son is bounding in from school singing jaunty snatches of song from the Christmas play and is even agreeing to put on a warm coat occasionally. He is also constantly asking us for chocolate from his advent calendar to which we as constantly reply, "Not yet. You've got ages yet!" And he looks back at us with hopeful brown eyes in a way that says, more eloquently than words, "But - you've no idea how long two weeks can be when you're only five years old...". Relax, chocoholics, it will soon be less than one week; the wait is nearly over.

Actually, I must confess that I have not been immune to the strident appeal of the festive season in recent days. I have ditched nursery rhymes in favour of Christmas carols on the CD player while Isaac is having his meals and the other night I even thought of a perfect Christmas gift for my wife. Unfortunately, I had forgotten what it was by the next morning which is a shame because it had been something quite cheap. There, it's gone now, but if anyone else has an idea for a nice present to give a beloved spouse - not costing in excess of £9.99 - do please let me know.

For those of you who have not yet succumbed to the seasonal bug and are trying to indulge your inner Scrooge by clinging resolutely to the small part of the year that isn't Christmas, I should like to finish by sharing a little song with you. It has a story behind it. Many months ago - so long that I can nearly say 'years' - I had a job where part of my duties involved stuffing waste cardboard into a machine which turned it into big, half-tonne bales for recycling. As you may imagine, this wasn't the most mentally stimulating job I've ever had but my fellow-workers and I did our best to make life interesting. We talked, we groused, we sang and sometimes we even composed impromptu poetry. The following was one of our better efforts, though I've added to it since. Mervyn, me old collaborating pal, this is for you...


It's The Most Expensive Time Of The Year

The presents aren't ordered,
The house is disordered,
And tinsel stocks are running low;
The Christmas tree's busted,
The sledge is all rusted,
Who cares? 'Cos there's not any snow!