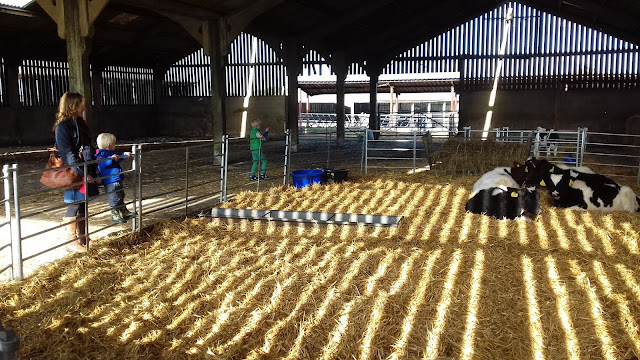 One of the hardest things about being a first-time parent is plucking up the courage to get your newborn child out of the house. It seems such a daunting task to pack everything up, swaddle the baby in suitable clothes (not too hot, not too cold - how am I supposed to know?), erect a new and bewilderingly complicated-looking pram and venture out of doors only to return twenty minutes later, day out complete, and repeat all the previous processes in reverse. Faced with such considerations as these it is all too easy to abandon any thought of going out. "What's the point anyway?" "The baby won't care." "I can't be bothered with all the hassle right now."

That's a mistake, of course. Taking your child out, even when only a few days old and if only for a few minutes, is an important if tiring and time-consuming exercise. For a start it gets the new parents into reality again, in the middle of what appears to be an endless round of feeds, nappies, short sleeps and wakefulness whirling about inside four, unchanging walls. Reacquainting yourself with trees, flowers and sky is an important part of moving into normal parenthood in a world that has suddenly become unrecognisable. And as for the baby; who's to say that they don't appreciate a bit of fresh air from time to time as well?

For differing reasons the same holds true even when the child gets older. Going out still seems like an unnecessary effort laden with problems and with more than one child it may seem doubly forbidding. What if they are too noisy? What if they run away? What if they don't want to go home again? What if they moan the whole time? What if they get tired and want me to carry them? Some parents may look at their children climbing the walls and swinging from the lampshades and feel, understandably, that if they're this bad inside they'll be ten times worse outside the restrictions of the home.

Set against this are the many parents who will tell you that they are determined to get their children out at some point every day, regardless. There are many good reasons for this. Children dislike being restricted and getting them outside allows them to release energy in a many ways far better than tearing down the wallpaper. It gives them more to look at, which keeps them interested and it usually means that they are more contented when they return home - even if there are a few initial complaints about going back in when they wanted to stay out.

All of which brings us - in rather a roundabout way - to my photo of the month. This was taken at an open day on a local farm. There were calves, pigs and tractors to see; the farm shop was open, as well as the milking parlour and cheese-making rooms and there were also a few stalls selling food and other items. It was chilly so we had to wear coats. It was too far for Isaac to walk so we had to take the pram. We didn't take any food so had to buy a pack of biscuits from the farm shop when the boys got hungry. We had to drag Isaac, protesting loudly, out of every tractor he got into and finally strap him - still protesting - into the pram to go home. Yet we enjoyed ourselves. When we look back at our simple day out it won't be the crying, the extra baggage and the extra expense that we remember - it will be nothing extraordinary: the tractors, the pigs, the open air and a picture of a large and airy barn with calves lying on the straw, a little boy standing on a gate and golden sunlight streaking though the boards and fanning out across the floor.
Posted by Daddy Do-little at 13:24:00