When the Boiler Breaks. A New Year Story. 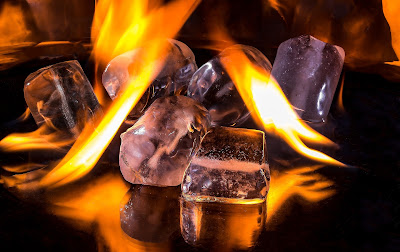 December 31st. Saturday morning. 2am. I wake up, unexpectedly alert, and lie for a few moments in the darkness, listening. Outside the duvet is a cold, cold world. I can feel it on my head, feel the chilly touch of its fingers every time I move. Gilly, who has gone to sleep with the aid of two hot water bottles, an extra blanket and several layers of clothing, including a dressing gown, is sleeping peacefully. She has the advantage of long hair to keep her ears warm. I can't hear much from Isaac and conscience is compelling me to get out of bed and check up on him. Parenthood is full of that - this habit of reminding you to do things you don't want to.

Summoning my minor store of courage I slide back the duvet and hop out of bed, pulling the covers back into place to retain the heat. The cold is snapping at my ankles. Feet crammed into slippers, across the landing into Isaac's room where he is snuffling in his sleep lying, as usual, on top of his duvet. Graham is a master of cosiness - he will wrap himself up in his duvet so tightly that only the top of his head and the tip of his nose will be visible, though occasionally a foot or even a whole leg will escape and dangle there in the chill - but Isaac is the opposite. I don't want to risk waking him by yanking the duvet out from underneath so I hunt around, find a blanket and drape it over him as gently as possible. Even so, he stirs, rolls onto his front and, for a long moment, seems to be holding his breath for there is only the slight creak of the floorboards under my feet to disturb the silence of the room. Eventually he relaxes and I leave him wriggling around to find a comfy position and head downstairs to look at the fire.

In the lounge the fire in the woodstove has burnt low. Only a few red embers remain of the log that I put in there three hours before. I open the door and stuff in another log, making sure it's a fairly big one in the hope that it might last out until daylight, then scurry back upstairs leaving the vent on the stove slightly ajar. I'm glad not to have to check on Graham - he's sleeping at Grandma's house tonight: at least, I assume he's sleeping and not still bouncing around the house like a crazy wind-up toy. I scramble gingerly back into bed then roll over to squint at my bedside clock. There's a little thermometer reading on there. It says 9 degrees Celcius. That's about 10 degrees less than I want it to be but there isn't much I can do about it so I snuggle down under the duvet and return, a little uneasily, to sleep.

We spent the Christmas season away from home this year. Delayed by a band of fog stretching across most of the South of England we eventually returned home on Friday afternoon to a house that was both achingly cold and smelling strongly of damp. Something was wrong with the boiler. All the signs indicated that we'd had no heating for days and there wasn't a single drop of hot water in the house. In addition, it's bank holiday weekend, and all the local plumbers were signed off for New Year. Fortunately, kind friends showered us with electric heaters and we had plenty of wood piled up outside the back door. Our little wood stove, up till now nothing more than a scenic and vaguely useful luxury, has suddenly become, for a few glorious days, an absolute necessity. It doesn't heat up much else apart from the lounge but it is heating that up with as much determination as it can muster. The rest of the house is a hazardous tangle of electric wires and heaters of all shapes, sizes and description. Rooms vary from warm to very cold depending upon how much heat we decide to lavish on them. This isn't such a problem for me. I grew up in a home which could only be said to possess central heating because the chimney stack went up through the middle of the house. Bathtime as a child was an exercise in keeping as much as possible below water level and getting dried really, really quickly. Dressing in the morning was even quicker. I could get dressed as a teenager and rush downstairs to the woodburner in the same amount of time as it takes me to sit up, yawn, stretch and rub my eyes these days. Gilly, however, grew up in a house with radiators and boilers and other heat-retaining commodities. For her, in consequence, the last couple of days have been rather like a bad dream that you don't wake up from. The two boys, of course, have never experienced anything like it. We've wrapped Isaac up in the warmest onesie we can find but he doesn't appreciate the fact that it has enclosed feet and keeps on trying to shake them off. Graham, poor lad, is just going to have to snuggle down under the bedclothes like the rest of us.

On the other hand, we have managed to find a plumber to look at the boiler (old work contacts - one of the many reasons for not falling out with people) and have the prospect of getting it fixed in the not-too-distant future. 2017 may start out cold for us (until we get all those heaters fired up) but warmth - and a return to normality - is hopefully only a replacement part away. So, as 2016 fades into the history books and 2017 breaks in a shower of fireworks across the globe, I would ask you to remember all those other people - men, women and children - for whom cold is part of life, who would consider a bedroom with a temperature of 9 degrees Celcius quite a wonderful thing, who can only dream of a warm duvet and just a single room lit by the cheery flickering of a full woodstove. It is experiences like these that should remind us, not of what we have lost, but of what we, and our children, still have. It's the kind of thoughts that have become synonymous with Christmas; I hope they can endure into the New Year as well.