'Twas The Bug Before Christmas

Christmas is here...nearly. At any rate, the Christmas holidays are here. And so are the bugs. Sneezing, snuffing, wheezing and puffing our family has collapsed across the term-time finishing line like an endurance athlete at the end of a tough day at the office. It is a state of health shared by many other families. Dropping some medicine off at the school the other day I was apparently just the last in a long line of parents bearing bottles of Calpol and Nurofen, intent on providing their children with the all-important lunchtime boost of penicillin to get their young ones through the day. Despite all this TLC and vast expense on medical supplies both of our children have spent a week battling high temperatures, runny noses, loss of appetite and - finally - ear infections. Graham is at this moment curled up on the sofa, cuddled in his duvet and complaining that his ear is going chuff-chuff like a steam train. We only returned from the doctor a couple of hours ago and he already wants to go back for further assistance.

Fortunately the rest of us (including Isaac) appear to be on the mend which is a good thing because, as every parent knows, the term-time finishing line for teachers and pupils is stretched out at exactly the same time as the starting pistol sounds for parents. We've got them all back for two whole weeks of Christmas cheer and Yuletide joy and there's only so many things that you can do with a five-year-old when the days are short and the nights are long. However, we live in the modern age of computer technology and I'm hopeful that Pinterest might have a few ideas.

I was on Pinterest a couple of weeks ago actually, looking for ways to toddler-proof a Christmas tree. (Type in 'toddler proof Christmas tree' and see what you get) There were lots of very helpful people on there eager to share their wisdom and I was quite taken with some of the ideas. Some suggested putting heavy boxes round it and covering them in Christmas paper to make them look like part of the festive scene. Others recommended erecting a fence or putting it inside the baby's crib (not sure what happens to the baby, but that's your problem I guess). Some abandoned the idea of a traditional Christmas tree altogether and advised having a tree made from green felt wrapped round a traffic cone. As I say, very impressive.

Even so, I chose to ignore them all.

Which was, as it turned out, not a great idea.

Unfortunately, telling Isaac "no" and "don't touch" in a very stern voice every time he goes near the Christmas tree doesn't always prove effective. When we put the tree up it looked immaculate - probably because I was forbidden to have anything to do with it, as usual. Graham declared that it was the "best Christmas tree in the whole world" which was probably incorrect, but very loyal of him all the same. Isaac's response was "oh, wow!" in tones reverberating with awe and wonder but it didn't stop him yanking off a couple of red baubles and trying to chomp on them, I assume in the mistaken idea that they were apples. His admiration for the tree endures undimmed. I will never forget the picture of him standing in front of the lighted tree with his sunglasses on saying "p'etty" before proceeding to rip the baubles off, one by one, and scattering them about the lounge. A toddler's appreciation of beauty may be profound but it doesn't stop them destroying it with carefree abandon.

Now our Christmas tree looks a little bit like our family: tired and a little bit battered and untidy. Its lower limbs are denuded of baubles and its jaunty strings of pretty red beads dangle haphardly wherever I've chucked them after entering the lounge to find Isaac tangled up in them. And yet, despite all the abuse, it still looks lovely. The lights twinkle cheerily, the tinsel sparkles, the golden reindeer decorations glitter. I still think it would have been a good idea to barricade it in a corner surrounded by a bodyguard of paper-clad boxes but something tells me that the worst is over now. I haven't found Isaac removing red beads for at least twenty-four hours, which leads me to believe that a corner has been turned. All that destruction of decorations has lost its appeal.

Am I just being unduly optimistic? Maybe.
But there's one other thing. With Christmas only a few days away and a load of new toys to be rapidly unwrapped I can only hope that dismantling Christmas trees - anybody's Christmas trees - won't seem quite so interesting. There's just the little matter of someone wrapping all the presents up beforehand. Now I wonder who that'll be? 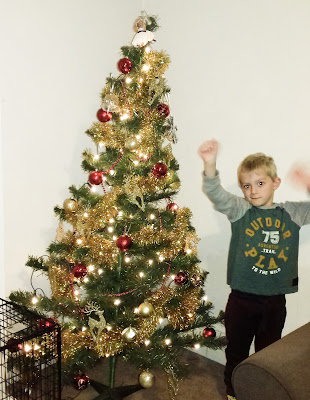