8 Great Books For Babies and Toddlers 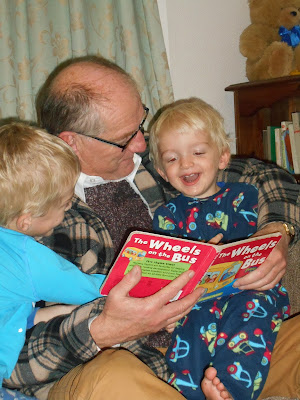 If books did sport these would be the ones playing rugby, American football and ice hockey. Life in the danger zone. Existence with thrills, spills and an awful lot of violence. All that sticky tape isn't there for decoration - it's the only thing holding most of these books together. Sometimes even that isn't enough.

Welcome to 8 of the best - and bravest - books in existence. Your toddlers will love them so much they'll want to eat them!

1. 'my first' series
[Dorling Kindersley, also printed by Sainsbury's]
'Simple but effective' are the best words to sum up this series, which include such titles as My First Words, My First Animal Book and My First Farm. These board books are divided into subjects such as 'Food and drink', 'At the seaside', 'Minibeasts' and 'Farm vehicles'  and contain loads and loads of photographs - as many as 20 on a double page spread - with the name of each picture written underneath it to be individually pointed out to your child. Many pages also have questions that you can ask your child about what they see in front of them: 'Which tractor would you like to drive?' 'What do you like best about the seaside?' They are attractive, colourful and have so many different pictures that toddlers will never get tired of them. Big tabs with an appropriate picture makes it easy to find which page you want to look at.

2. Noisy Baby Peekaboo!
[Dorling Kindersley]
Another book in a series, this board book has large flaps inside for children to open. When they do a little sensor is revealed which recognises daylight and makes sounds, such as a baby laughing or a goodnight lullaby. Babies love looking at pictures of other babies, which already makes this book a winner as it has lots of photos of babies playing and doing all the things that your baby does. Throw in some sound effects and you're just increasing the enjoyment.

This is a book for reading in the daytime only, though, as my experience indicates that the sensors don't pick up on artificial light, only daylight. So always make sure you're reading this near a window!

3. Who Said Moo?
[Parragon]
Our first copy of this probably came from a charity shop. When it finally disintegrated we bought another second-hand. Not the easiest to get hold of then but well worth the effort. This board book tells the story of a cockerel who finds himself supplanted when a loud 'moo' wakes up the animals on the farm before he gets the chance. He tours the farmyard to find out which animal is responsible but all deny it by demonstrating the noise that they make instead - until he gets to the last one... This book has buttons to press with the sound each animal makes (and unlike many buttons they're quite easy to push for little fingers). Experience shows that this is a story that will be read again and again and again...

4. Dinosaur Roar
[Ragged Bears Publishing]
Simple, catchy rhymes, crazily imaginative drawings and lots of roarsome dinos. What not to like?
"Raar!"
(That's what the kids will say.)

5. v-tech Peek-A-Boo Book
[v-tech]
This is probably branded as a toy but it's a pretty good book and practically indestructible as well. Made from hard plastic, this brightly coloured toy/book plays a selection of nursery rhymes as you turn the pages. There are things to twiddle, push and pull inside too so lots of things to keep little ones interested.
Only one problem: there isn't an 'off' switch. Be prepared for 'Hey, Diddle, Diddle' from morning through 'til night.

6. Farmer Duck
[Walker Books]
A modern classic(?) this is the story of a downtrodden duck whose life is made a misery by a lazy old farmer. The duck does all the farm (and house) work, while the farmer lounges in bed eating chocolates. That is, until the other animals take a hand...
The plot may be highly improbable (but there are lots of children's books with improbable plots) but this is a good read nonetheless. The big selling point as far as toddlers are concerned is all the animal noises that you can make. You'll have them 'mooing, baaing and clucking' until the cows come home. Enough to drive you quackers!

7. Say Goodnight to the Sleepy Animals!
[Macmillan]
Another brilliant story for animal noises as cat goes on a tour of the countryside saying goodnight to every animal he meets. Great bedtime book.

8. Hippo Has A Hat
[Macmillan]

A list of children's books wouldn't be complete without at least one Julia Donaldson creation and I've chosen this one to finish with, although Chocolate Mousse For Greedy Goose is equally worthy. This is the rhyming story of the day that a party of animals go into a clothes shop and start trying things on. Want to see what a gorilla looks like in blue fluffy slippers with rabbit ears? Or a pig trying to get into a pair of jeans a size too small? Wonder no longer. The answer is here.

Email ThisBlogThis!Share to TwitterShare to FacebookShare to Pinterest
Labels: The '8 Great' Lists