Tenterden - and its Christmas Market

Tenterden, our local town, prides itself on being stylish, in a timeless, refined sort of way. It's an attractive place, with many fine old buildings, tall trees lining the road, extensive grass verges and an imposing church presiding benevolently over the town centre. Not even the presence of the busy A28 carriageway running right through the middle is able to seriously detract from the all-pervading air of well-to-do tranquillity. The town website welcomes the visitor, in all seriousness, to the 'Jewel of the Weald' and I've never heard anyone trying to dispute the title.

The High Street caters mainly for those with just a little bit extra, featuring shops such as Crew Clothing, White Stuff, Laura Ashley and Monsoon. For the hungry, among other eateries there's a Costa Coffee, rather a select place by its own admission which boasts that only 1% of the world's production of coffee is good enough for their use. Feeling this was rather a waste of the world's resources I once asked my brother-in-law what he thought happened to the other 99%.
"Starbucks," he replied.
Of course there are aberrations. Superstore giant Tesco managed to get into the town but fortunately it's tucked away decently behind the houses out of sight. (The town centre supermarket is Waitrose.) Worse, someone allowed The Original Factory Shop to open up in the old Woolworths, right on the High Street this time. It doesn't quite fit but at least it's not Poundland and generally grumbles about the town deal more with ancient pubs being painted a light pink instead of white and the growing number of charity shops. Thus this handsome High Street, which 'must rank amongst the most attractive in the Country' (the town website again) preserves its grandiose serenity.

Even so, there are occasions when the Grand Old Lady lets her hair down and, in common with most of the country (even those places with very ordinary high streets), Christmas is one of those times. Clearly this is done in the proper way, don't you know. The town has never had Katie Price switching on the Christmas Lights - dear me, no - but the lights go on nonetheless and very nice they look too. My heart may ache for the white Christmas lights of my youth rather than the modern 'cool blue' but the effect of the skeins of lights festooning the trees leading down the high street is still quite lovely.

The lights form one of the central features of the annual, much-publicised, Tenterden Christmas Market, an all-day affair which starts at 10am and goes on until 8pm. This year, for the first time, it took place on a Saturday rather than a Friday and we had decided to walk down to town in the evening with the two children to see everything under the lights. I must confess to being rather a fan of Christmas lights. I like the way they brighten up the early winter nights and make something dark and sombre come alive. Accordingly we left the house after darkness had fallen and walked into town, Graham running ahead to show the way and Isaac snuggled up in the pram, his coat collar up around his nose. It is a big advantage living within walking distance of the Christmas market because it can be a nightmare to park otherwise as a solid queue of cars stretching down the road earlier in the day had demonstrated. 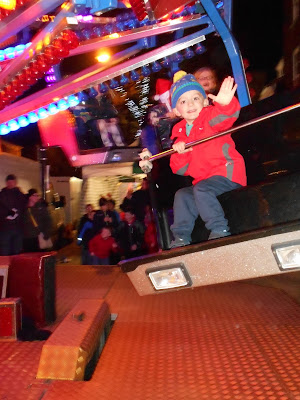 As we drew nearer to the high street we could see the blue lights twinkling in the trees and the first stalls came into view. The Christmas market is full of stalls, selling everything from doughnuts to dinner-plates; many little tents stretching down both sides of the street. Practically all the shops are open too so the potential for picking up early Christmas presents is excellent. Suddenly, we were in it: the lighted stalls, the jostling, weaving crowds, the whirling lights of the fairground rides whizzing round and round. With a child a trip to the market can become expensive as they will want to go on every ride possible but it was a heartwarming sight to see Graham's smile and frantic waving as he clanked round on a little train and swung past on the roundabout. I stood there, trying to make myself and my pram as small as possible, the crowd thrusting past on either hand and watched him and shared for a few moments in his joy. There is a feeling so very satisfying in seeing a small child enjoying something because it is so unaffected; what you see is how they feel and, wonderfully, it makes you feel it too.

There were further delights, a traction engine chuffing down the road being among my favourites because it was so unexpected. Another unexpected occurrence was two friends of mine asking innocently whether there was a McDonalds anywhere - they come from Ashford, a town where style has been sacrificed for shopping malls and urban sprawls (and, incidentally, where Peter Andre has switched on Christmas lights) - so I was able to make allowance for them. Even so, I stared a bit.
"McDonalds!" No, no, Tenterden doesn't have a McDonalds. Perish the thought!
Passing on down the street I indicated the sign above a nearby restaurant.
"We don't have McDonalds - we have Tea Shoppes!"

We returned home late, happy, tired and with a packet of Monster Munch and a whirling glow-stick as souvenirs. It had been a busy evening, much more so, I thought, than when I used to attend the same event when I was young. It was called 'Late Night Shopping' then, in those long-ago days e'er the careworn look came into my eye or wrinkle to my brow and the main novelty, as far as I can remember, was that you could go to a shop that normally closed as 5pm and find it still open at 7pm and with a plate of chocolates on the counter. Perhaps my memory is faulty but I can't seem to recall the lines of stalls and the many rides of the modern era - or maybe I just never wanted to go on them.

I wonder whether it will be the same for the present generation in years to come. Perhaps when the four-year-olds of today take their own children to the Tenterden Christmas Extravaganza in twenty years time it will have changed out of all recognition from the event of the current day. Perhaps Santa will come roaring down that fine High Street in a Ferrari surrounded by elfin cheerleaders whirling pom poms. Perhaps they'll have a Slade tribute band on the town hall balcony bellowing 'So here it is Merry Christmas' to the cheering crowds below. Perhaps Justin Bieber, fresh from his jungle experiences on 'I'm a Celebrity' will rock up dressed as Frosty the Snowman to switch on the town's Christmas lights.

But then again, this being Tenterden, perhaps not.

A few details:
Tenterden Christmas Market (held this year on Saturday 5 December). 10am - 8pm.
Entrance Free but you will have to pay for the rides
Parking available at this event but if you're thinking of going in the future be advised that parking space is limited and you might have to queue. On-street parking or parking on side-roads is difficult to find.
Visit http://www.tenterdentown.co.uk/ for full details of this and all other events.
Posted by Daddy Do-little at 14:01:00