EEEEEEEEK! The honeymoon is over.

In a voice made shrill by tiredness, Isaac is protesting against the injustice of a hard world that places his father inside the kitchen and a hungry baby outside, behind a strong metal gate. You would not think to look at him but behind that chubby-cheeked, cheerfully cherubic face lies a scream loud and piercing enough to lift the top of a person's head from its moorings and send it spinning. Now, after a few test runs he's steadily working his way up through the decibels.

I wince and retrieve my scalp from behind the microwave. A hopeful glance at the clock reveals that it's still too early for Isaac to have his lunch. Surely he can't be hungry yet? It's not like he didn't eat his breakfast.

Maybe he is hungry? No, probably just over-tired. He's supposed to be fresh from two hour's sleep. In actual fact he's slept for nary a second. I resolve to stand firm. Can't have my timetable messed up too much.

It's rapidly turning into a battle of wills. On the one hand we have a thirty-year-old man, six feet in height, weighing in just short of eleven stone, with several days' worth of stubbly bristle on his chin and a list of 'must-do' jobs as long as the Champs-Elysees. On the other we have a beardless baby, thirteen months old and approximately 2.6 feet high (when he's standing up - which isn't often), in search of company and something to eat and with no weapons other than a way of looking reproachfully over the top of a stair-gate and a loud and penetrating yell.
No contest. In this duel over priorities THERE CAN ONLY BE ONE WINNER...

OK, so he was hungry after all. And lonely. And tired.

Most babies operate under the motto 'Who Cries Conquers', which may be roughly translated as 'He Who Screams Gets His Own Way'. Most fathers would prefer to use the slogan 'Ignoring Is Bliss'. Not on this occasion. Earplugs would be handy though.


Isaac has no right to be tired really but I suppose that sleeping with your eyes open would make anyone weary. I know it would me. As it is I don't get much chance to take a daytime nap, even with my eyes shut. (More yoghurt, Isaac? Yes, I thought so.) There was a time, a long, long time ago - around the middle of last week, I suppose - when Isaac was a confirmed daytime sleeper who needed his six hours 'twixt dawn and dusk. Apparently those days have been put behind him. There was a time - y'know, around the middle of last week - when I could bundle Graham off to pre-school of a morning and expect to have two child-free hours to do household chores while Isaac slumbered contentedly upstairs. Apparently those days, also, have been put behind me. A little re-adjustment of my daytime schedule may be required methinks.

The sight of grey streaks suddenly appearing in my hair can also be put down to the fact that almost simultaneously Isaac has learnt to climb onto the sofa. The getting up bit is fairly straightforward but the dismount - usually head-first - is less assured and led us to a rapidly re-arrange our lounge furniture in an attempt to prevent injury. Cushions have been placed strategically around the room, the smaller sofa jammed against the wall so he can't take a nosedive over the back and the many-cornered coffee tables have been shunted into a corner where there is less chance of them inflicting any unintentional damage. Less Sleep + More Activity = One Busy Daddy.

No mistake, for this stay-at-home dad the honeymoon is over. 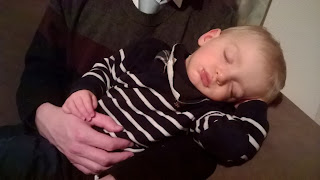