Too much audio for the little guy? 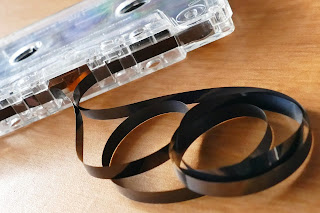 A few weeks ago I wrote an enthusiastic piece on this blog extolling the brilliance of audiobooks and the many benefits that they bring to the home. Since then it has become apparent, to use a familar cliche, that you can have too much of a good thing. Audiobooks have undoubted advantages for keeping a child entertained and increasing their vocabulary but when they start to become a constant noise in the background even a book-lover such as myself begins to wonder whether they are taking up too much time that could be devoted to more active pursuits. The recent advent of The Famous Five - those well-known juvenile sleuths - onto the listening list has strengthened this attitude.

Most people are familiar with Enid Blyton's The Famous Five, the group of four children and their dog Timmy whose first adventure appeared in 1942 and who, despite becoming increasingly dated and non-PC, have somehow contrived to remain a staple of childhood reading ever since. In a series of 21 books they encountered a multitude of plots, crooks and criminals and through their own ingenuity, Timmy's teeth and the last-minute arrival of stout policemen always contrived to come out on top at the end. The criminals - who could always be identified early in the book because they were unkind, rude and disagreeable types who the Five didn't like - were not so fortunate. They would start the adventure cunning, clever and crooked, become increasingly clumsy and clueless as time went on and eventually end up bumbling, blithering and, ultimately, beaten and behind bars (bagged by a bevy of the burly bobbies aforementioned). And that's enough alliteration for one day. Good reading for children at junior school I'd have said. Until now...

It was, admittedly, my fault. A few months ago I was wandering through a shop when I noticed a DVD of Famous Five adventures. I bought it, thinking perhaps it might be interesting for Graham to watch when he was older - let's say around seven years old. Then, a few weeks later I came across an old cassette tape with two of the Five's adventures on it in dramatised form. I borrowed a tape recorder, demonstrated to Graham how this piece of antiquity operated and left him listening happily. Alas, it wasn't long before the tape was on continuous replay and Graham spending long hours hunched on the sofa listening for the sixteenth time to the devious deeds of a vicious villain called Rookie and how he was outwitted and hauled back to prison. Videos of Famous Five on the DVD and YouTube soon followed.

Growing somewhat tired of hearing the same story over and over again I found - in what I considered a moment of genius - that there were Famous Five audiobooks available on YouTube, many of them over four hours long. There was a serious side-effect, however, as Graham now not only remained hunched on the sofa but also stared fixedly at the computer screen as the audiobook played. He could not be persuaded to move and complained loudly whenever we moved the computer or an advert suddenly interrupted the flow of the story. It was then that we decided that serious audiobook rationing would have to be introduced into the Dolittle home.

Results since have been mixed. Graham still listens to plenty of books (The Wind in the Willows is his current favourite) but at least he has remembered there are other forms of entertainment and we only get The Famous Five on a reasonable number of occasions. Speaking for myself, I have also remembered that some effort on my part is required to entertain the children too. Audiobooks may be preferable to TV but they can be taken too far by both children and adults. If some parents have found that putting their child in front of a DVD is too much of a temptation to resist I have found the same is true for audiobooks. 'Everything in moderation' is a good motto and although finding spare time to play with Graham can sometimes prove difficult I have been reminded over the past few days that it is also essential.
Posted by Daddy Do-little at 12:12:00