With the warmer Spring weather already making itself felt and the evenings barrelling out at an appreciable lick it is inevitable that many parents will dig out the back door key and shoo the kids out into the garden. Some children, of course, like to be outside all year round but from a parent's perspective it is much easier to let them roam when you don't have to spend hours putting on coats, hats, scarves, gloves (which will soon get lost anyway) and wellingtons only for the little dears to reappear five minutes later complaining of cold and wanting to be let back in or, even worse, demanding that Daddy comes out to play with them.

We had a friend round with her two children one sunny-ish day in the middle of March (that is to say, it was cloudy and cold while they were here and the sun came out immediately once they were gone) and, in the intervals of pacifying small children who both wanted to use the same toy at once, spent a bit of time talking about the best children's garden toys. She has a small garden, which makes it a bit harder, but I was fulsome in my praise of trampolines, slides, swings, sand pits and push-along cars. I was less enthusiastic about pedal-powered tractors, which are very good at going downhill but impossible for little ones to propel uphill again and therefore appear to have been designed exclusively for country mansions with acres of nice, flat patio space. I added that many of our garden toys had been purchased second-hand, there always being a ready market for used kids' toys and a multitude of space-strapped parents who are only too glad to get large and unwieldy objects out of the garage and off their hands.

We have a garden shed crammed with outdoor toys: scooters, toy spades, wheelbarrows and watering cans, bikes and a variety of other weather-worn articles many of which have been designed to allow them to be used in the wet - which is fortunate when they accidentally get left out overnight in a thunderstorm. However, it wasn't until our friend had departed that I remembered that sometimes children don't need all of this stuff. It's well-known that they can derive amusement from even the simplest things; they will unwrap an expensive Christmas present and have more fun playing with the wrapping paper than the toy inside (this will subsequently be advertised for sale on Facebook and snapped up by voracious bargain-hunters like me) and they can spend ages entertaining themselves with a plastic spoon and a colander.

So when it comes to garden toys, all you really need is a bit of mud and an old plant pot...

...and a hot bath afterwards. 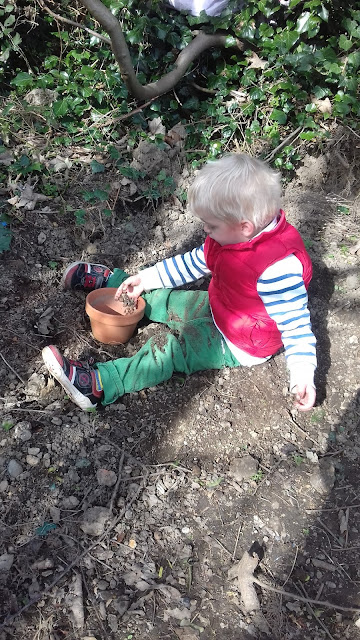